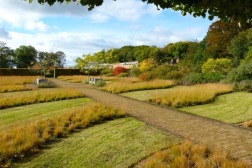 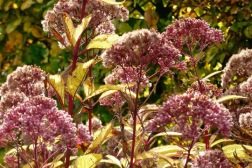 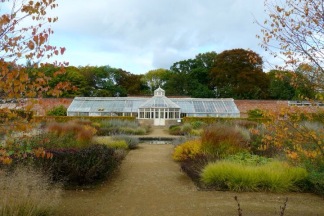 Friends have just visited this Walled Garden at Scampston and I was reminded of my visit several years ago – in fact six years ago to this very day – and yet I’ve not presented these images in these pages beforehand. Shame and Fie!

So for your delight and delectation, these autumnal images and a link below, which will tell you more about these remarkable gardens, from a summer visit, by way of compare and contrast and an article by Stephen Lacey from 2008 in The Telegraph. Enjoy! 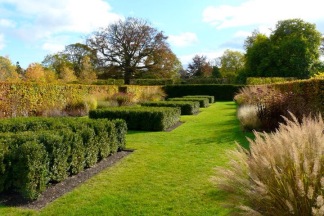 Within the historic Walled Garden at Scampston Hall lie eight rooms, each one a wonderful display of contemporary planting, structure and form. By Stephen Lacey

‘It was awful, full of Christmas trees and sheep, the greenhouse derelict and the dipping pond full of petrol cans.’ This is how Caroline Legard described the four-and-a-half-acre Walled Garden at Scampston Hall, Yorkshire, when she and her husband, Sir Charles Legard, a retired electronics engineer, inherited the estate in 1994. Its subsequent transformation by the leading Dutch designer Piet Oudolf in 1999 has been one of the most significant garden projects of recent years.

But in 1994 it seems it was not just the garden that was in a sorry state; it was the entire estate, including the imposing stone, rotunda-fronted house, owned by Sir Charles’s family since it was built in 1690. ‘It needed a new roof, there were only three 13-amp sockets in the whole of the downstairs. It was a tip,’ Lady Legard recalled.

But having trained as an interior designer and worked for the National Trust on its restorations of some historic Yorkshire properties, Lady Legard was better prepared for the task than most. ‘The Trust does things properly, and that was invaluable training for me here.’ She lost no time in getting to grips with the house, and once done, she took her new broom to the Capability Brown park and its accompanying woodland and rock gardens.

The Walled Garden was a trickier undertaking, because clearly it could not be returned to its former kitchen garden glory. Few private estates need or can afford vegetable and fruit production on this sort of Victorian scale. ‘I thought about a commercial use, but I didn’t really fancy going to market every week with my organic produce. But I did want to find a solution that would help pay for itself, as well as put life back into the garden.’

Lady Legard gravitated towards the idea of a flower garden that would be open to the public. And if the public were to be attracted, she knew it had to be different. ‘I realised that we needed a contemporary design, something that signalled that things had moved on. In the past there has been a very good garden at Scampston [with contributions not just by Capability Brown, but also by Charles Bridgman in the early 18th century, and Reginald Farrer, the rock garden expert, in Victorian times] and I wanted to make another one here.

‘I had read about the New Perennial movement [the more naturalistic and ecological approach to planting pioneered by designers in Germany and Holland], and seen the garden that Piet Oudolf had made for John Coke at Bury Court in Hampshire. I liked the plants he used and they seemed to be growing well on that light, sandy and dry soil, which is the same as we have here.’

I rang Oudolf at his home in Hummelo, Holland, to ask how the design formed in his mind. Greatly in demand all over the world, he was just back from New York where he is working on a new public park. ‘The Walled Garden was like a big room,’ he said. ‘I decided to treat it in the traditional English way of dividing it into smaller rooms, but using ingredients and formal shapes that weren’t traditional. I put in contemporary elements, and planting that you wouldn’t normally see. It was a nice project; I didn’t have to make any compromises.’

The entrance to the garden is unusual in that you do not immediately walk into open space. Instead Oudolf takes you down the long, narrow Plantman’s Walk, sandwiched between the old wall and a new beech hedge topped with pleached limes. Entertaining you along the way is a border of unusual shrubs and perennials with all-season interest.

Cloud-pruned box, palm-like Tetrapanax papyrifer and purple Cercis canadensis ‘Forest Pansy’ are among the foliage highlights here, with the white, maroon-blotched saucers of Lady Legard’s favourite tree peony, Paeonia rockii, and the wonderful blue hardy Geranium ‘Nimbus’, contributing to the flower colour. Cleverly, this area gives Lady Legard and her four gardeners an outlet for trad­itional British plantsmanship and the freedom to experiment with new plants, without effecting Oudolf’s more controlled composition beyond.

Halfway along the walk, you do get a glimpse into the heart of the garden, but the guidebook encourages you to continue around the fringe walk and to enter on the far side. Here you step into a corridor of lawn, broken by repeated, hazy waves of flowering grasses (Molinia caerulea ‘Poul Petersen’) set in an irregular but clean-edged diagonal pattern. It is like being in a wild meadow, but one that has been purified and ordered.

You are now inside one of eight formal compartments within the Walled Garden. Four of these are primarily topiary gardens. There is the minimalist Silent Garden, a broad expanse of lawn, punctuated by 24 yews, clipped as columns on top of square plinths, and arranged symmetrically around an empty reflecting sheet of still water.

Further on are two narrow gardens, each with a line of box cubes down its centre, which when more mature will be turned into concave and convex sculptures. And there is the Serpentine Garden, where freestanding hedges of yew will have their tops pruned into sinuous interlocking shapes.

But flowering perennials and shrubs feature everywhere. In fact, the numbers are staggering. ‘There are so many plants, we couldn’t afford to buy them all,’ Lady Legard explained. ‘We needed 4,500 beech plants for the hedges, and 200 lime trees alone. So we had to propagate as many perennials as possible ourselves. We raised and divided 50 molinia grasses to make 6,000 plants, and starting with 10 astrantias grew 500 more from seed.’

The major concentration of perennials is down the central pathway, aligned with the old restored greenhouse. Half this area is open to the sky, with four large beds around the oval dipping pond, each with a secret sitting area in its midst.

It is awash with ecological groupings of plants from dry meadow and steppe habitats, perfectly suited to the conditions and requiring no staking, in Oudolf’s trademark purple, blue, red and crimson colours: globe-shaped alliums, thistle-flowered eryngiums, catmint, spiky salvias ‘Mainacht’, ‘Blauhugel’ and ‘Amethyst’, and pincushion-like cirsium and knautia – sparked up by yellow phlomis, the rusty plates of Achillea ‘Walther Funcke’, and the warm-tinted grasses Sesleria autumnalis, Deschampsia cespitosa and Panicum ‘Rehbraun’.

The other half of the area mirrors this layout, its four beds this time set around an oval of tall, strap-leaved Molinia ‘Transparent’ grasses, but here the planting is contrastingly tall, with a little forest of multi-stemmed katsura trees (Cercidiphyllum) between which are clumps of starry-flowered Astrantia major ‘Claret’, mop-headed pink monardas, spiky Acanthus hungaricus and the lime-green grass Carex muskingumensis.

With its flat topography, formal ground patterns and low tapestries of plants, the Walled Garden cries out to be viewed from above. So one of its compartments is given over to a mount. Its grassy flanks are planted with crocus, and its surroundings as an ornamental orchard with lines of the early pale pink cherry Prunus x yedoensis above giant snowdrop-like leucojums, blue and cream camassias and other bulbs. A steep staircase leads to its crowning platform. At only three and a half metres high, the Mount is not tall enough to allow you to see over all the hedges and get a full panorama, but it does give you a sense of the whole Oudolf design.

The tight order, clean symmetry and controlled repetitions of his composition are decidedly continental. It does not have the sensuality or surprise of the quintessential English garden – few scents, no dramatic changes of mood or colour (quite sober tones throughout) and no big plays with contour, light and shadow. Instead of engulfing you and stirring up horticultural thoughts, it seems to encourage objective contemplation. I felt as far removed from my own gardening as I would in a modern art gallery.

And that is the genius of it. Oudolf and the New Perennial movement bring a new take on gardens. There are new design rhythms and a whole new meadowy flora. They merge mini­malism and ecology. They give planting a contemporary look and context. British designers, spearheaded by Tom Stuart-Smith, have been hugely influenced by these innovations, and are now absorbing them into the more romantic English tradition. Scampston serves as a showcase and landmark of this evolving style.

‘It is a challenge keeping it looking good and maintaining the balance within the planting,’ Lady Legard confessed. ‘But I love it. And of course it is still maturing. I am longing to start giving the yews their serpentine tops.’ I spoke to one of Scampston’s gardeners, who wondered whether his bosses fully realised what a feat they have achieved in this Walled Garden. It is indeed a triumph. 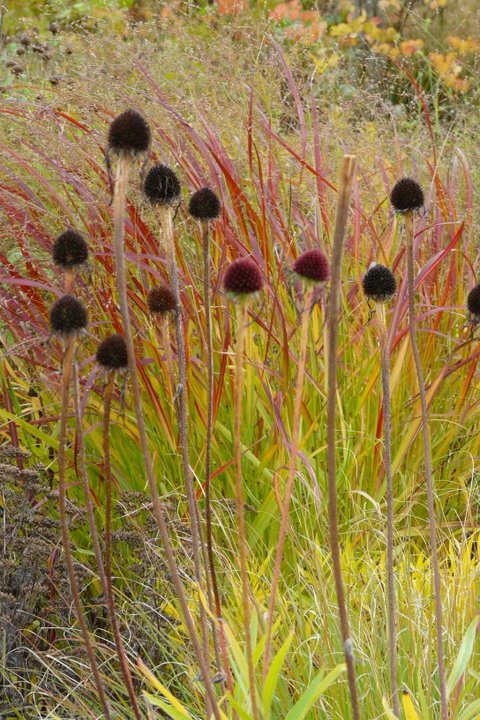