This Mexican Fleabane, despite its lowly name, is a classy plant and one, when – and where – happy, will grow to form a daisy empire in your garden. Erigeron karvinskianus forms a froth of tiny white daisies, with yellow eyes and petals that mature through purple and pink to give a very attractive overall display.

Where it is happy is often in the hottest and driest parts of the garden and especially in the crannies of warm walls and between the stonework of garden steps. As Carol Klein says below ‘a single plant, once established, will become the capital of a huge empire …’ The trick, it seems, is how to get it established – read on –

Build your own daisy wall

Carol Klein explains how to succeed with erigeron

Daisy, daisy: a common sight in the south-west of England and Mexico

Visitors to the south-west of England are often intrigued by the little white-and-pink daisy that clings to rocky cliffs and stone walls throughout the region. Football fans with an interest in gardening would have noticed that the same daisy colonised the concrete terraces of the stadium built in Mexico City for the 1970 World Cup.

The daisy in question, Erigeron karvinskianus, is a native of Mexico, but is such an opportunist that it now crops up in every corner of the globe. A single plant, once established, will form the capital of a huge empire, spreading itself to any nook or cranny where its preference for sun and good drainage can be satisfied. But how to establish it in the first place?

I searched for it for years before finally acquiring a plant that had seeded itself into an empty pot at a tree nursery I was visiting. Finally I installed the plant in the middle of the south-facing end of a raised bed. Since then it has occupied every crevice between the rocks to the extent that it is difficult to detect the stone wall behind it.

Needless to say, visitors often ask for a bit – there is, after all, so much of it. But I no longer pull out a root and pot it up, because I know that earlier attempts to propagate it this way have failed miserably. Instead, I hand over a few fluffy seed-heads, wrapped in a tissue or hidden in a matchbox.

In common with many rock-dwellers, Erigeron karvinskianus makes strong, wiry tap roots that drill into the spaces between rocks, ensuring that the plant is firmly fixed and drawing on water and nutrients to help it grow. Such roots mould themselves to the rock and so are unlikely to re-establish when rudely pulled out and re-planted. But a little seed, mixed with dry, well-crumbled soil and dampened slightly to make a manageable sludge, can be pressed into chinks between stones where, with a bit of luck, it will germinate. Then individual plants can send their own roots deep into cracks and crevices. Even if the majority of the mix falls by the wayside, some will be successful.

If you are not keen on plastering, there is an alternative. Simply sow the seed on the surface of a light, loam-based potting compost, then prick out the seedlings into modules – and when their roots have filled each cell, water well, empty them out and press each little plant firmly in place, ensuring that it is in contact with the soil between the stones. Water the soil on the top of the wall well so that it can percolate to the roots of the new introductions.

Surplus plants can be used as fillers in containers or in their own pots. Redundant parsley pots or strawberry pots are ideal places in which the erigeron can do its perpendicular thing.

Dead-heading ensures a longer display – and if some of the flowers have already set seed, then of course you can chop the seed-heads off and give them to someone who has been admiring your daisy wall.

On this, and other self-seeders, an article in the Guardian by Dan Pearson

It is the moment of the ox-eye daisy – its bright-white face seen in numbers illuminating motorway embankments, railway sidings and cracks in concrete. They come in the way that the dandelions did before them, taking a window in the early summer and making it their own. The ox-eyes, or moon daisies, have an interloper’s tendency in that they like the awkward places. They produce seed in plenty – you can see it blowing about when it ripens; and some of this takes, winkling its way into a crack or a crevice where it is happy to live on very little.

I come back to the self-seeders again and again because they cover for you when you may not have planned for every eventuality, but these pioneers are part of a much looser group of plants that can be relied upon for the “problem” corner. Over-cosset them and they will turn up their noses and move on, but allow them to find their own corner and they can become a friend for life. The half-way houses they favour might be a crack in the wall – magenta Centranthus are the mountain climbers of the pack – or a slip of a place between a path and a wall. The likes of Alchemilla mollis will be more than happy there. Growing on next to nothing, they will reward you with more flower because they feel they are under threat and must reproduce.

Alpine strawberries are a case in point and it is no coincidence that the varieties you can buy commercially have been selected for not having runners. “Alexander” will stay put and behave quite appropriately where you put them, but the runners of the true Fragaria vesca are called so for a reason. One plant will send out several tentacles in a season, rooting where they touch down and sprouting a new plant.

Given a shady, dappled space they will conquer ground and tumble down walls and over steps. I love this behaviour in the right places and use them among hellebores and under deciduous shrubs where little else might grow in the summer. Let them run along the base of a shady wall and they will fray a hard place with greenery, bright white flower and the delight of the occasional perfumed fruit. All you have to do is find a home for the parent plant and they will find the cracks all by themselves.

I help this along by placing a parent plant in a pot where I know there might be potential. Mexican daisies, or Erigeron karvinskianus, can be notoriously difficult to establish in a crack if you try too hard, but grown in a pot they can seed about, casting their progeny in their thousands. All you have to do is to find the spot that suits the plant. The erigeron will need a hot spot with plenty of light, but the lovely Corydalis ochroleuca will like it on the cool side. Both will find the cracks and crevices in walls and steps that suit them.

I have three or four wild geraniums that use their catapulting seed-dispersal mechanism to great effect down at the farm. I recently found a white form of the Herb Robert at Phoenix Perennials in Hampshire that I am going to let loose in the cool corners here by letting it seed from a parent plant in a pot. The magenta form has found its way into the vertical cracks of the walls and it likes the places where hungrier weeds would fail through “malnutrition”.

I’m going to try the bloody cranesbill, Geranium sanguineum, to see if it will seed about here like the other wildings. Also, G pyrenaicum “Bill Wallis”, as it looks like it might be another interloper worth knowing. “Bill Wallis” is a fine form of the mountain cranesbill, sprawling away from a central rosette of perennial leaf with loose-limbed branches studded with mauve flowers. They come in their thousands from early summer and if they start to look scruffy in high summer they can be cut back hard to return with another flurry in the autumn. By then I might see the first new seedlings germinating in places into which I could never “garden” a plant.

Pot up several ‘parent’ plants of anything you want to seed about and try the potted plants in different places to see if you hit a spot which favours the seedlings. Sometimes it will take a few attempts to strike lucky, but it is easier than trying to force seedlings. They like to find their own way 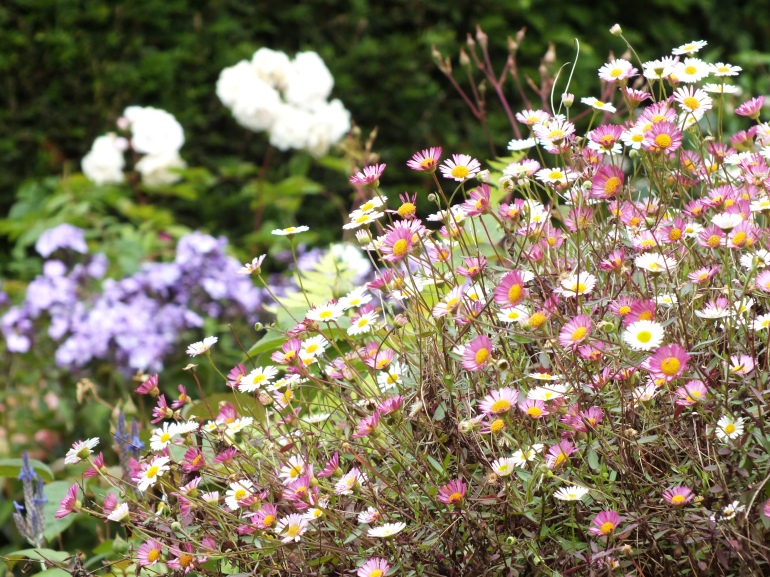 Here it is growing in a wide, shallow urn – where it had been for several seasons, rain-watered and underfed – and loving it. This erigeron is a signature plant for Petersham Nurseries and a new stock of plants is expected soon – to continue this spread of Empire even further…