These photographs were taken in the March at a Design Course run by David Austin, following the course in October that I’ve just written about. The bare bones of the gardens are laid bare and the winter pruning has been completed.

It will be interesting to look through both October and March galleries to see where the biggest changes have been wrought. Compare and Contrast! 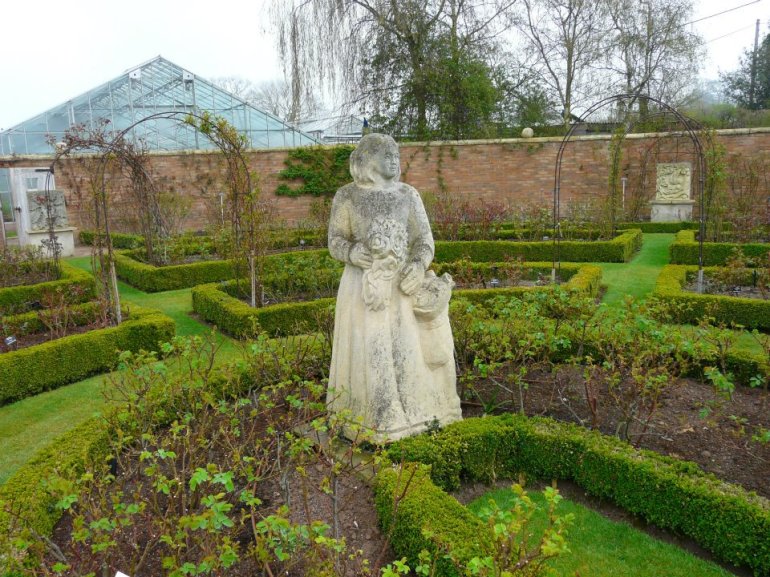 This is the circular garden, The Victorian Garden, with the box-edged planting beds – and peacocks – with warm brick wall covered in climbers. 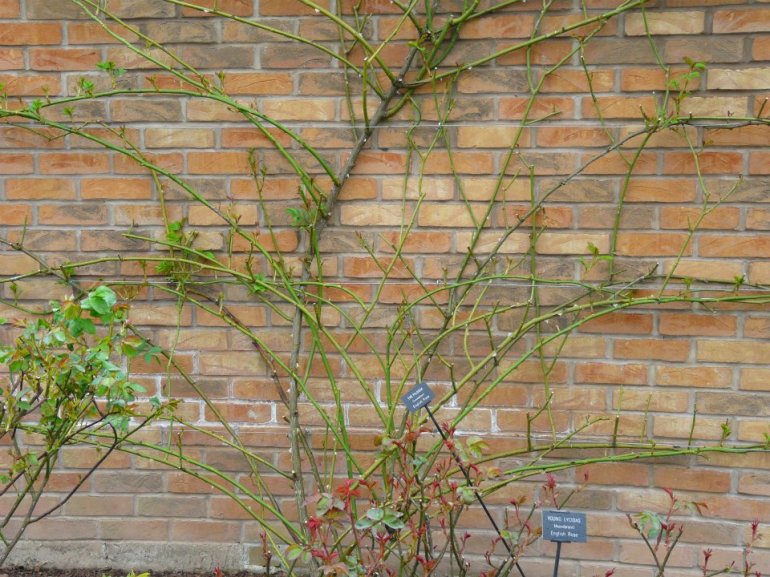 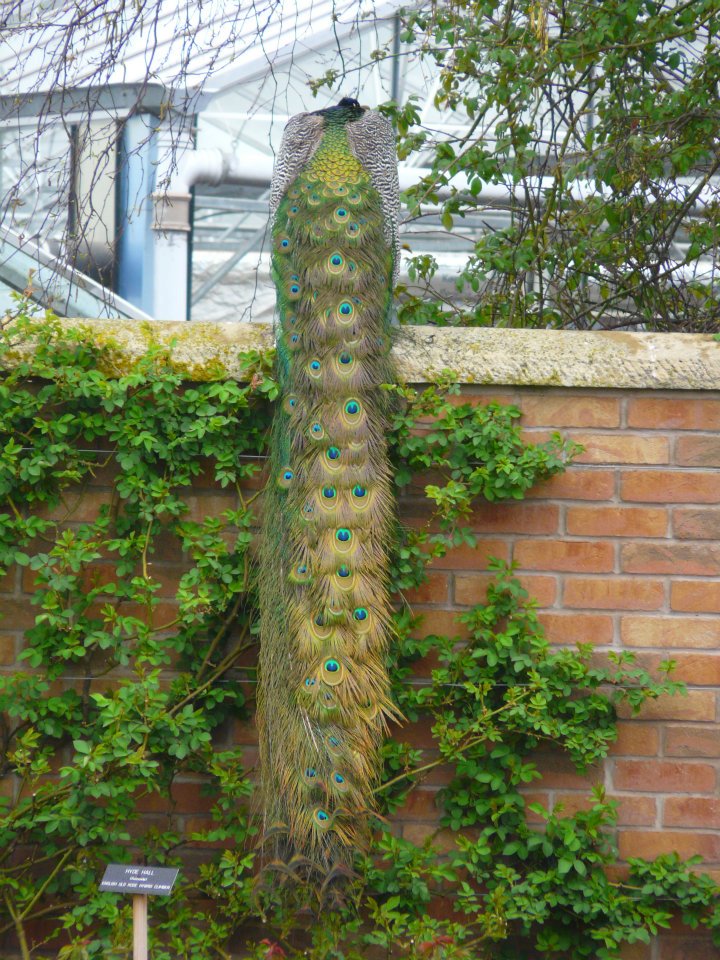 The pergolas and walkways are still supports for all manner of climbers and the more flexible ramblers. These have been twined around the supports (as much as some of the stiffer varieties can be – the ramblers take to this treatment much more readily). As these are show gardens, the numbers of plants are multiplied at every turn – the numbers in each planting bed, how close they are planted – as well as doubling up on the specimens/per pillar and post. These roses are very well fed to cope with the density of planting. We might not do this ourselves at home! 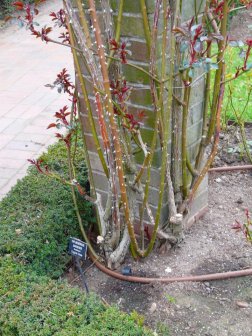 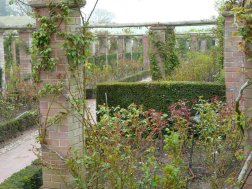 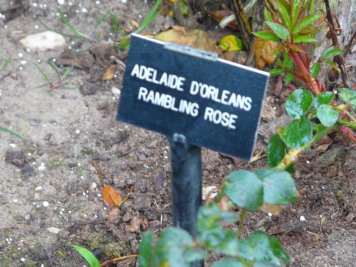 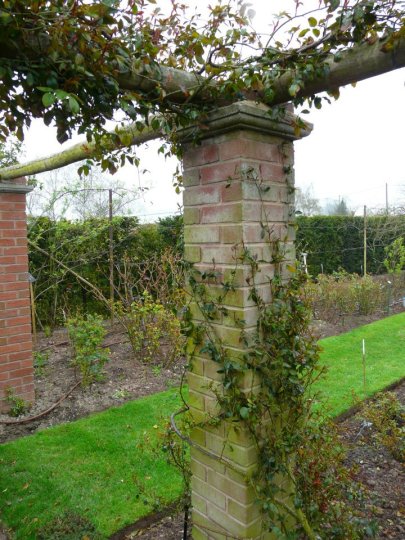 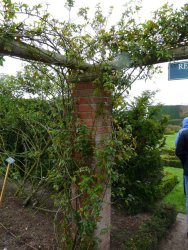 The plants on this pergola are less than a year old. 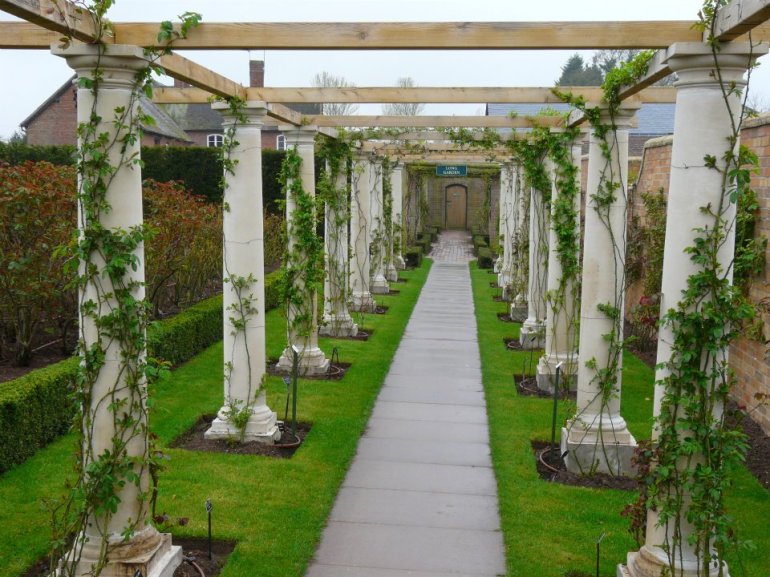 While on the adjacent wall, The Generous Gardener, with bright ruby-red young foliage, is being trained. 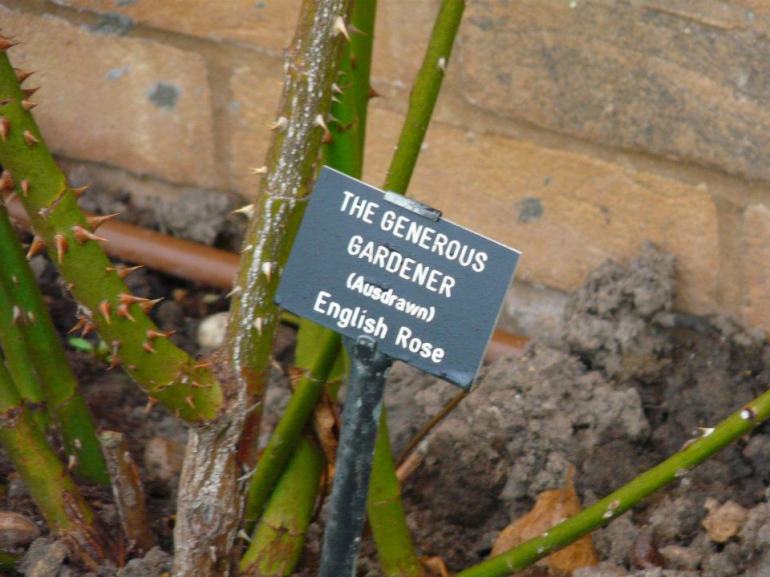 Alongside Spirit of Freedom

The garden containing the Loggia (the Renaissance Garden) shows its design clearly, with symmetrical box edging to these beds either side of the canal. 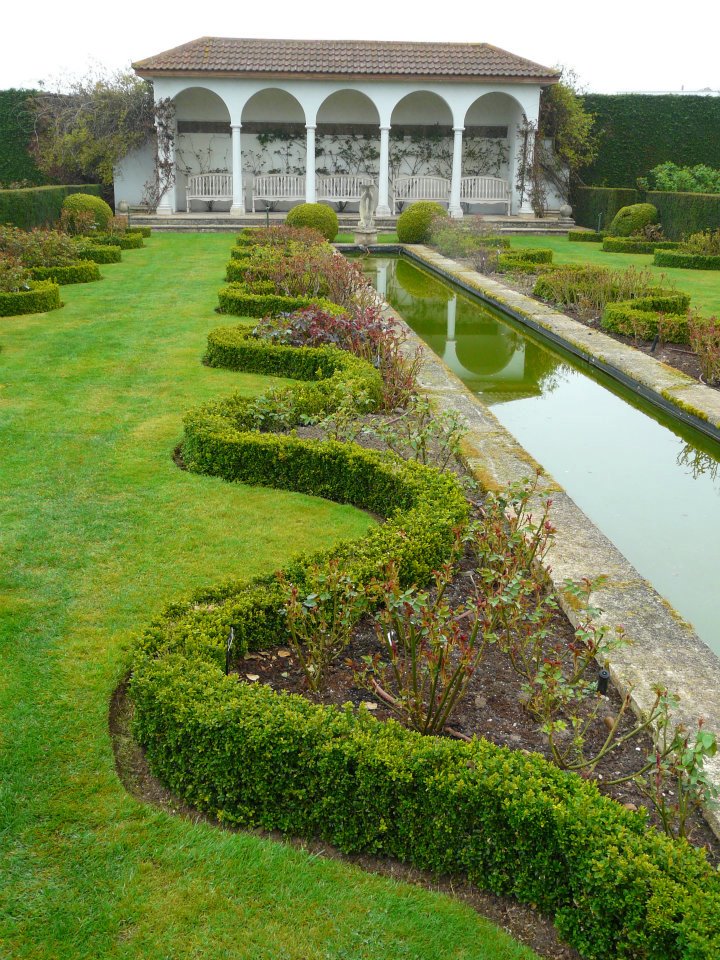 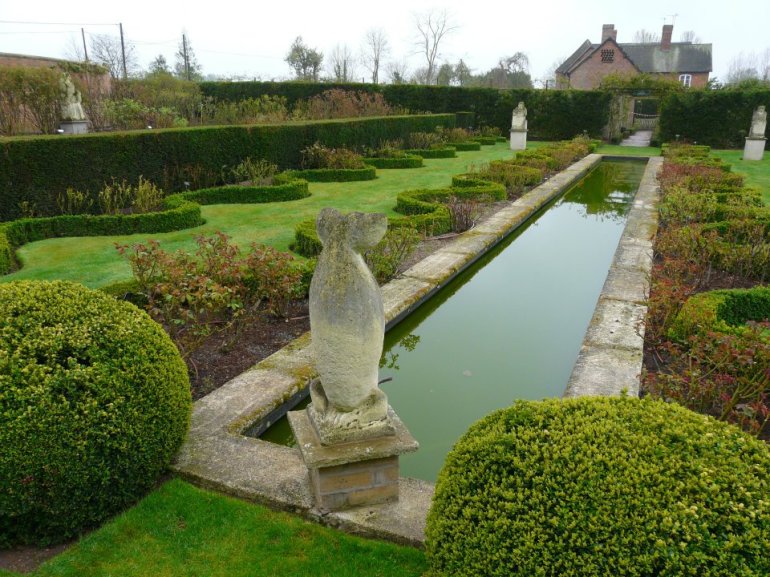 While under the covered loggia, there are climbers, including St. Swithun 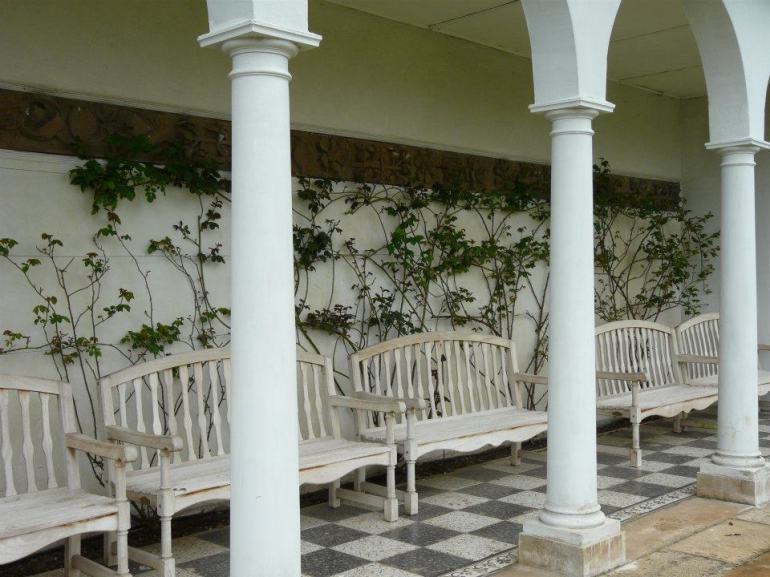 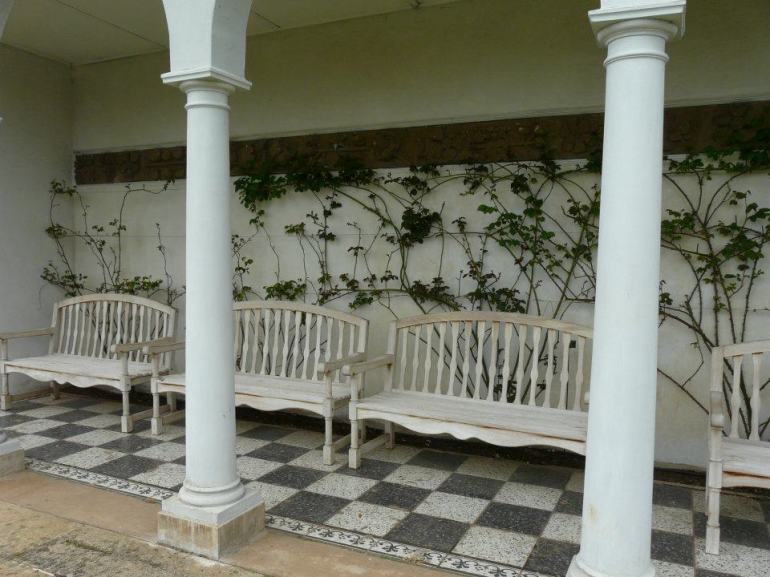 The formality of the main area here gives way to something looser, with the patterns repeated in the grass path.

Back in the Lion Garden – you will remember these Yew pyramids just about holding their own in the froth and bulk of the roses in the photographs from October, the previous Autumn. 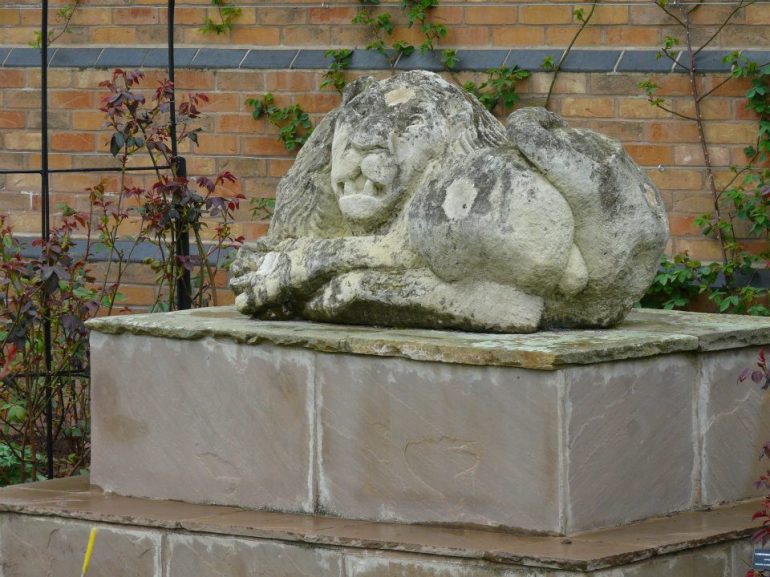 Even Brother Cadfael, one of the taller shrubs, has been cut back by at least half. 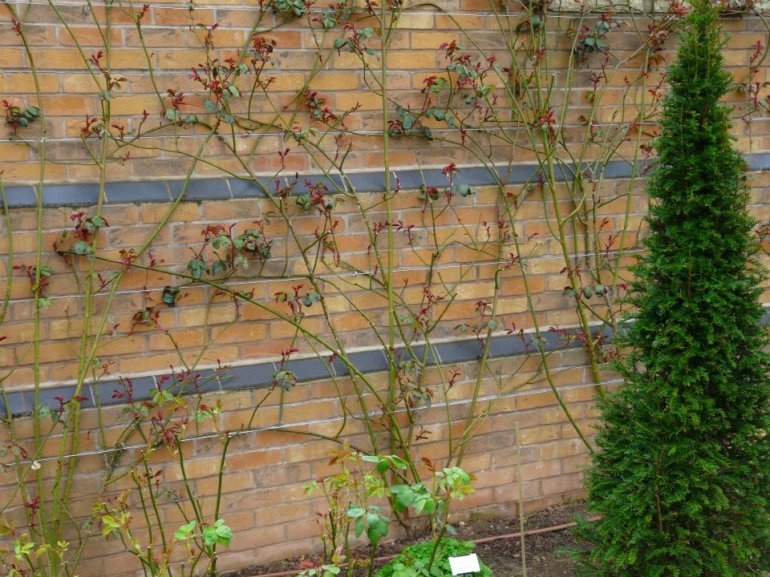 The climbing roses have been pruned with the long stems pulled to fill the available space and the laterals – side branches – pruned to within a few buds only. These will form the flowering spurs this season. 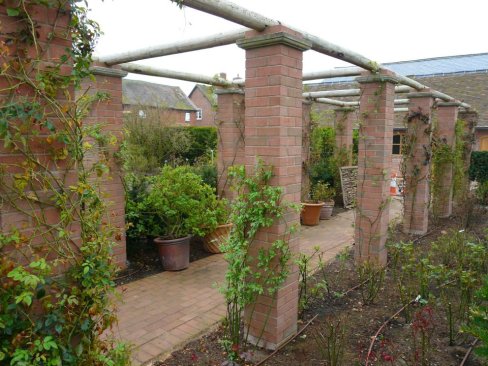 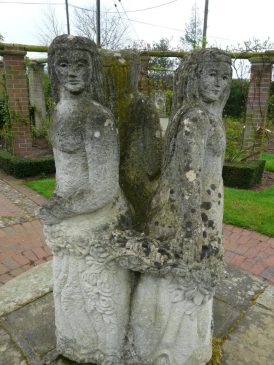 The roses in the Wild Collection, a growing catalogue of species roses, here the specimens are left more to their own devices! 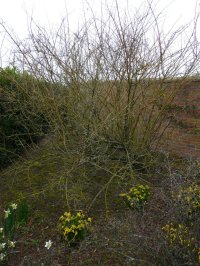 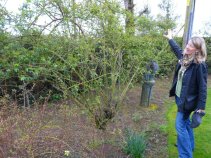 Finally, the Container Garden – neatly cut back but as you can see, still retaining a well-branched architecture to hold this years’ growth and abundance of bloom. 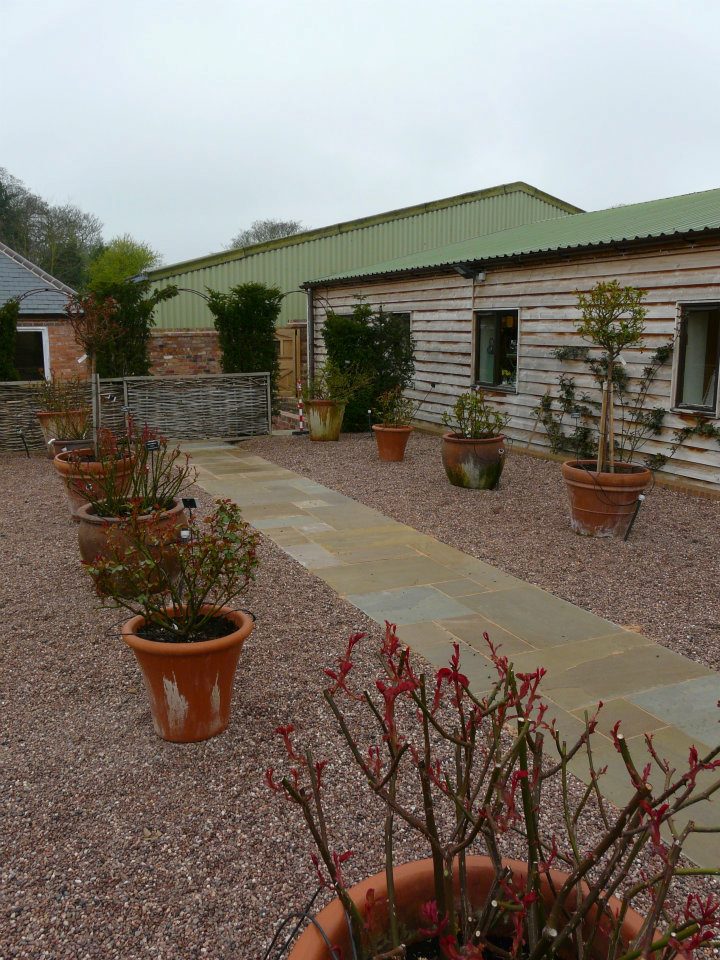 I’ll be covering pruning specifically of David Austin – English – Roses, in my workshop next week at Petersham Nurseries – along with much else.

In the meantime, I’ve some packing to do for a course I’m attending in Assisi, Italy, this weekend, where there are rather a lot of roses that need pruning and I’m paying for the privilege!

2 thoughts on “David Austin at Albrighton – some roses I pruned earlier! (A March Showcase)”