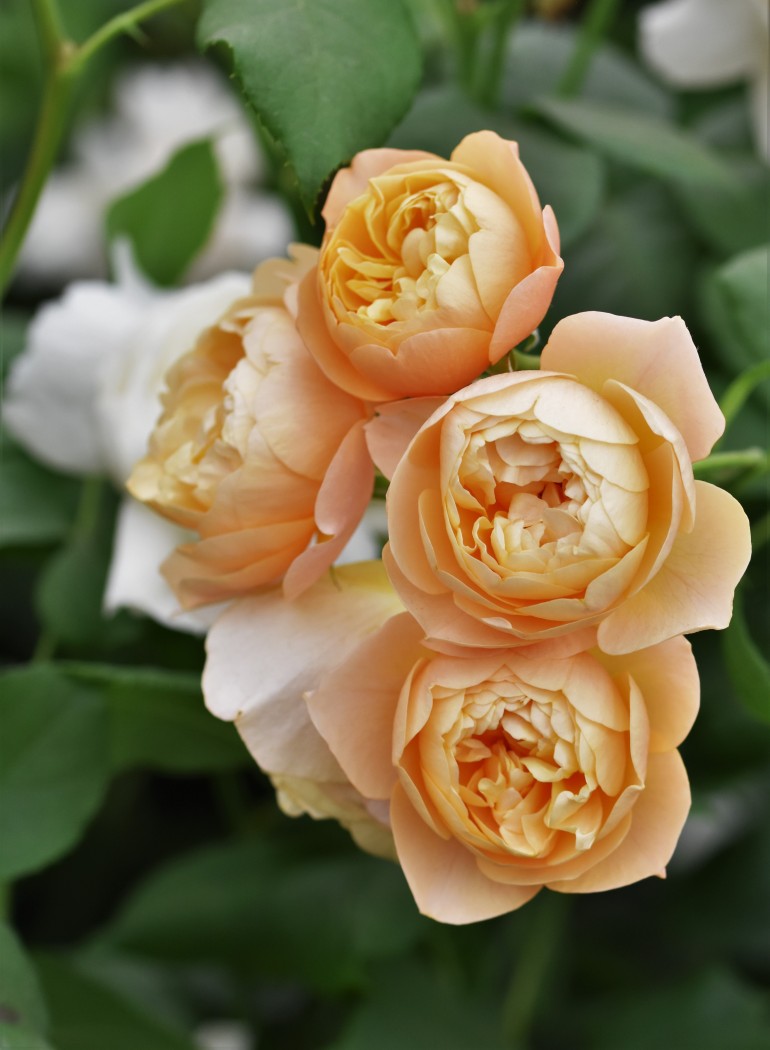 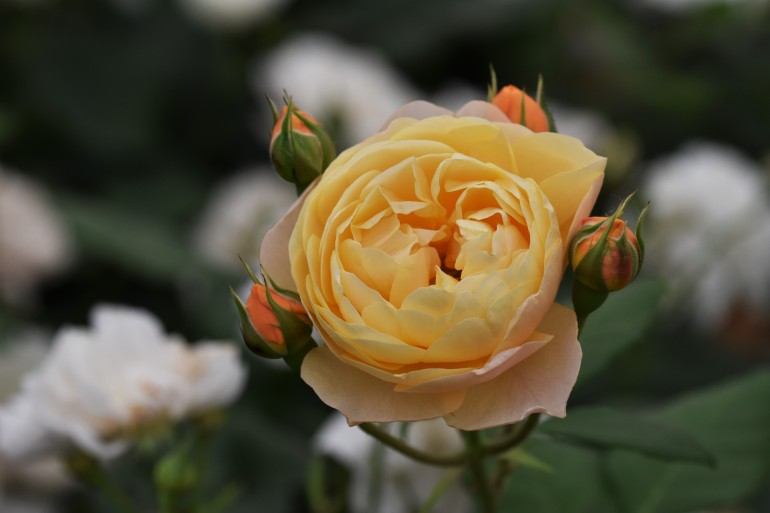 A touch of Comte de Champagne, The Lark Ascending  – shapely like Skylark and a touch of Jude the Obscure … Altogether a pretty, poised rose –

Very free-flowering peach coloured blooms, produced almost continuously.
A remarkably free-flowering variety that will be a valuable addition to any garden. Beautiful orange-red buds open to cupped peach rosettes with a lovely Tea fragrance. It matures into a very attractive, rounded, bushy shrub with few thorns. £2.50 from the sale of each rose will be donated to Roald Dahl’s Marvellous Children’s Charity, which helps make life better for seriously ill children in the UK. 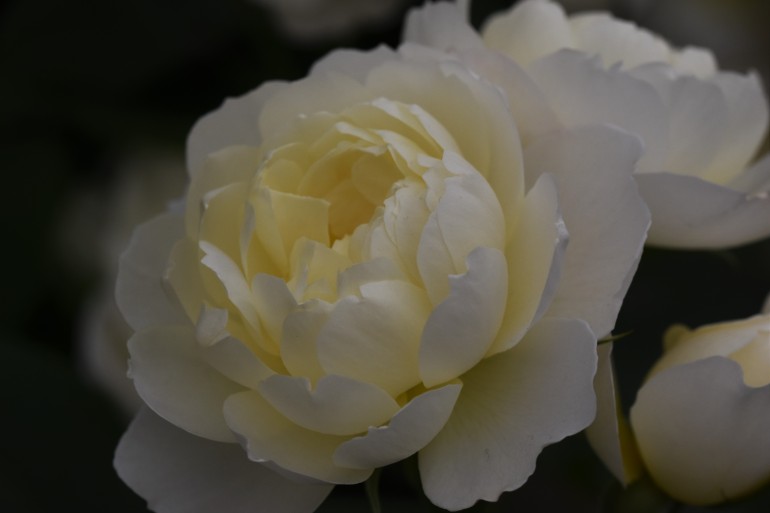 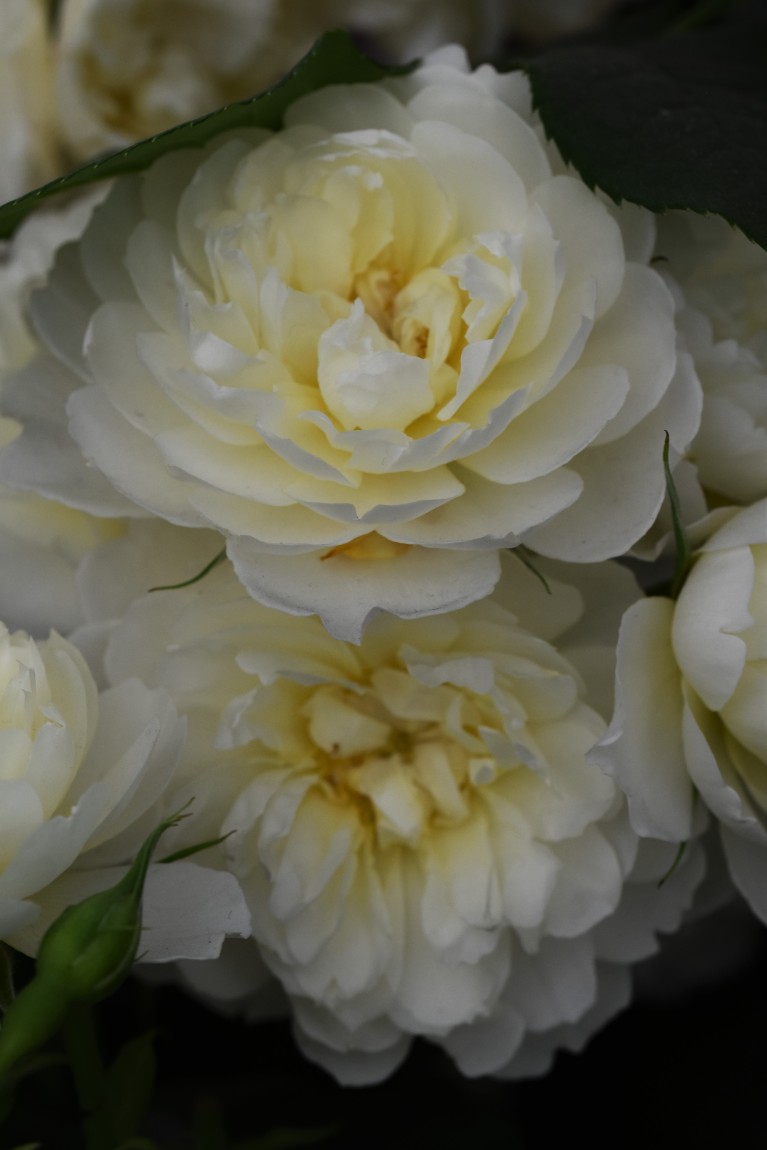 “Distinctive soft lemon blooms paling to cream. Extremely healthy and floriferous.
An extremely floriferous and healthy rose with a natural radiance and charm. The rounded soft lemon blooms are distinctive in character, with many delicately frilled petals arranged around a classic button eye. It forms a sturdy, upright shrub.” David Austin Roses

The name comes from the daughter of King Cymbeline and wife of Posthumus, in Shakespeare’s Cymbeline.
…. and finally, Bathsheba, a climbing rose to add to the pantheon of Fragrant English Climbers … Auschimbley to you and me –

“Large, many petalled apricot blooms. Superb myrrh fragrance with floral and honey character.
A vigorous repeat-flowering short climber, bearing many petalled rosettes. The blooms are a beautiful blend of colours, giving the overall impression of rich apricot. They have a superb myrrh fragrance – floral and warm in character, with hints of honey.” David Austin Roses
The ‘Bathsheba’ is the newest member of the English Climbing Rose collection. The name was inspired by Thomas Hardy’s heroine from Far From the Madding Crowd. With a distinctive and rounded fragrance of myrrh, this apricot-pink rose has soft full petals that open into shallow rosettes. This rose looks best with lots of green foliage to make the apricot hue pop.

A new rose named in Roald Dahl’s honour and developed by David Austin Roses will be launched at the RHS Chelsea Flower Show this week.

The English Rose, called ‘Roald Dahl’ (Ausowlish), is a gorgeous, peach-coloured bloom that has been developed as part of the celebrations for Roald Dahl 100.

The story began in 2009 when the rose, unnamed at that time, was born at the David Austin nursery along with 96,000 other seedlings as part of their meticulous rose breeding programme. Only a small selection of the seedlings go on to undergo rigorous trialling and detailed inspection for the next 7 to 8 years, after which time only 2 or 3 new varieties are introduced.  According to Rose Breeding Manager, Carl Bennett, the Roald Dahl rose stood out in the trial fields early in the process.

Liccy Dahl had the idea of a naming a rose for her husband’s centenary back in March 2014, when she proposed the idea to Alan Titchmarsh.  Liccy recalls “Whilst planning the centenary celebrations I focused on what Roald’s passions were, and gardening of course was one.  It was a natural next step to name a rose after him as it has universal resonance around the world just like the man himself.  We were honoured that the prestigious rose breeder, David Austin, agreed to be part of our plans”.

Following much correspondence, Liccy visited the nursery on 23 June 2015 to make the final selection of the rose that would be named ‘Roald Dahl’. The English Rose chosen appropriately has peach-coloured blooms, acknowledging Roald’s first children’s story James and the Giant Peach, which was first published in 1961.  Coincidentally, this was the same year that David Austin introduced his first English Rose, Constance Spry (Ausfirst)!

Many other wonderful coincidences have come to light – as well as celebrating Roald Dahl’s 100th, David Austin Senior is celebrating his 90th year.  Whilst Roald had a love of gardening, David Austin has a love of literature and is a published author – many of his English Roses have literary names!

The launch of the rose at the Chelsea Flower Show is the last chapter in this wonderful story, with Liccy proudly launching the rose alongside Sir Quentin Blake.  The rose takes centre stage in the David Austin display, which includes a giant copper peach sculpture – a one off piece commissioned as a tribute to the new rose, etched with Roald’s words and Quentin Blake’s illustrations from James and the Giant Peach.

The rose would be a gloriumptious treat for your garden, adding colour and a lovely tea fragrance to your outdoor space. It also has another part to play in raising funds for Roald Dahl’s Marvellous Children’s Charity, as £2.50 from the sale of each rose will be donated to helping continue Roald’s legacy of supporting seriously ill children. All in all, a charismatic rose for a charismatic author.

For more information about the rose, including how to order, visit the David Austin website or call their rose team on 01902 376300.