I visited Assisi a couple of weeks ago, to see the city and to attend a rose pruning course run by Richard Stubbs from David Austin at the rose nursery owned by Paola and Fabio Bianchi – Quando fioriranno le Rose – in the valley below the Basilica you can see rising up from the plains in the picture above.

Having been rather poorly in the days since I got back, this is the first time I’ve felt sufficiently well enough to lift the laptop and upload the photos of this trip! And what a weekend and what a city. I haven’t been to Italy in over thirty years and really, really wonder why it has taken so long to return. I shall certainly be including the area around Assisi – Perugia, Spello, Gubbio, Spoleto – in another itinerary soon and perhaps when the roses in the extraordinary gardens of Quando fioriranno le Rose are in bloom – May, maybe September – as I am quite sure the sight will be a spectacular setting for the city which rises on the foothills of the Subasio mountains (which were snow-capped in February). 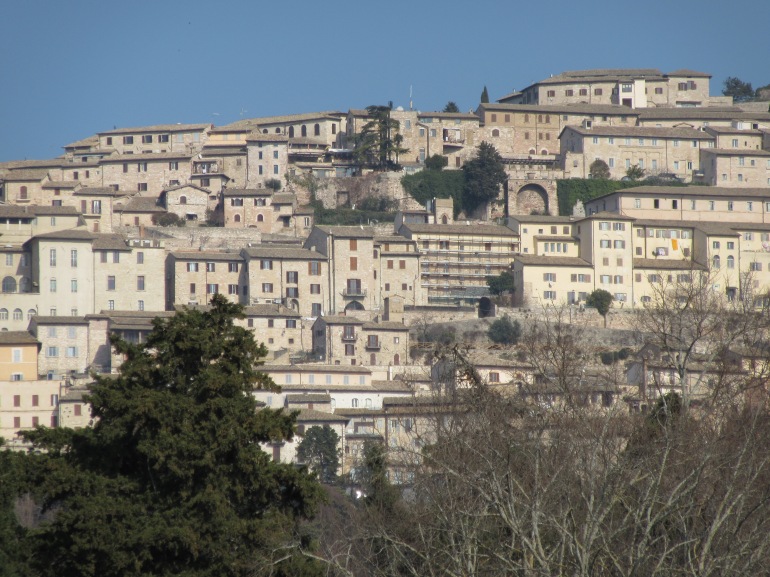 My hotel was on the plains, by the magnificent Santa Maria deglia Angeli complex, and about a forty minute walk along a very straight road back to Assisi with a climb up into the city which has a commanding view of the whole region. Tall cypress, naturally, punctuate the landscape and hedges of Viburnum tinus hemmed in the very many olive groves. Large fields were freshly ploughed for the growing season ahead. 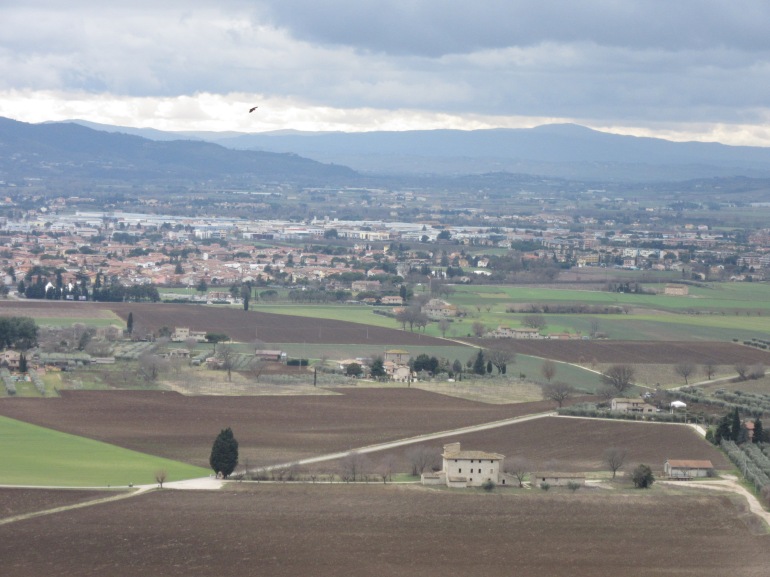 The rose nursery is along the road from the tall sentinel cypress, diagonally right in the picture. This view taken from above the Basilica of St. Francis (below). So quiet! 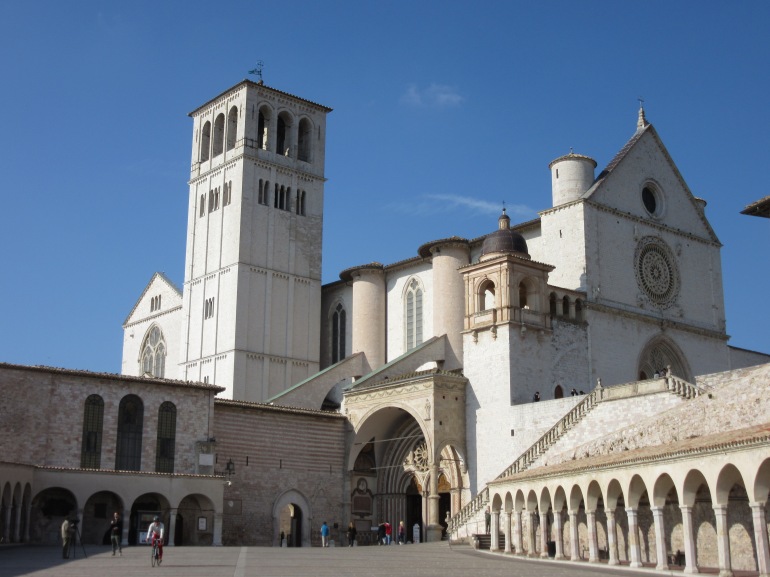 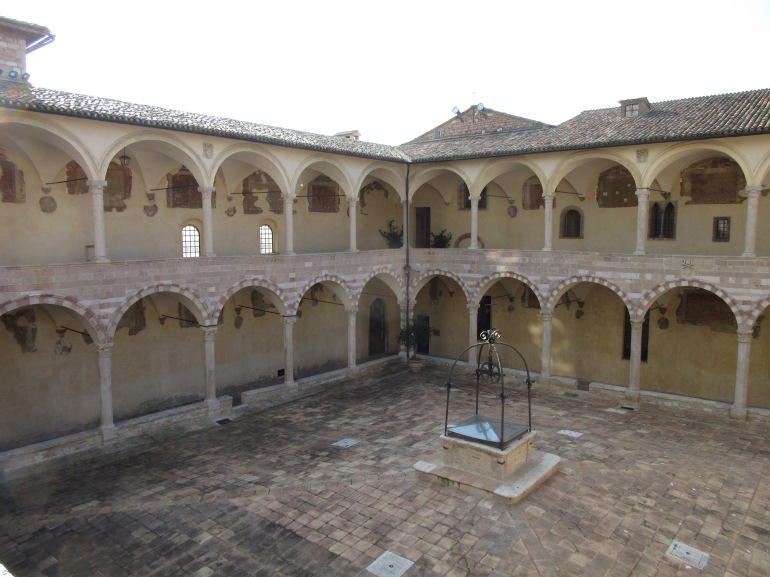 A hazy view across the plains to the mountains beyond. Santa Maria degli Angeli shimmers in the heat haze. 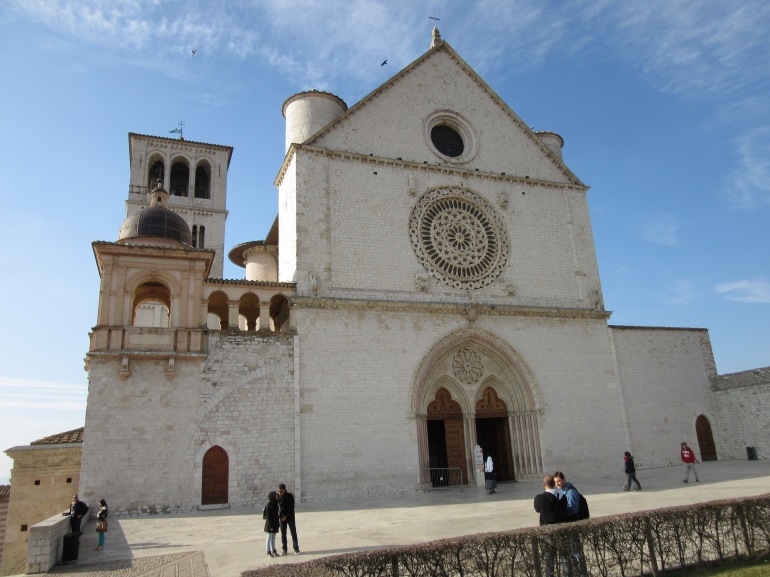 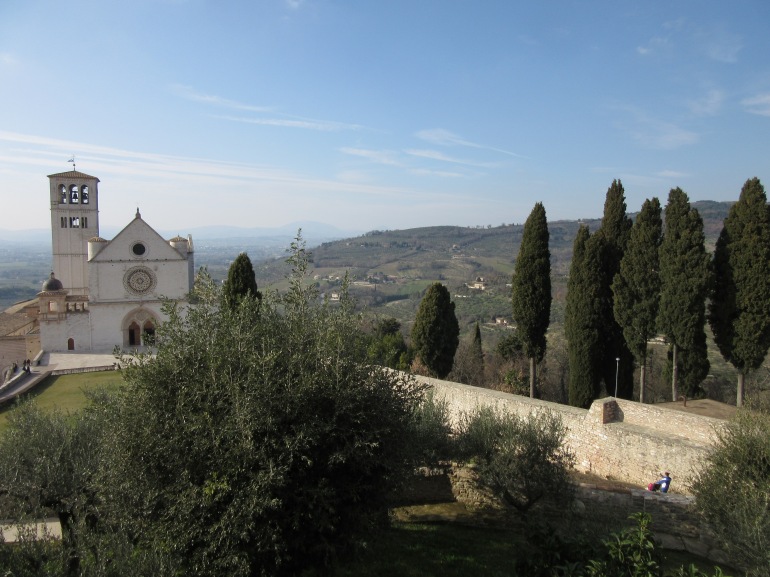 An ancient cypress atop this tower I think…

The city is constructed from this pinkish stone with toned terracotta roof tiles, open spaces and gardens peppered with grey-green olives and dark cypress. The effect looking back down across the city as you gain height through the maze of alleys, staircases and narrow streets is always breathtaking.

The Roman Temple of Minerva in the heart of Assisi, now a Christian Church. A jewel box inside (I went late in my trip and there be photographs!) 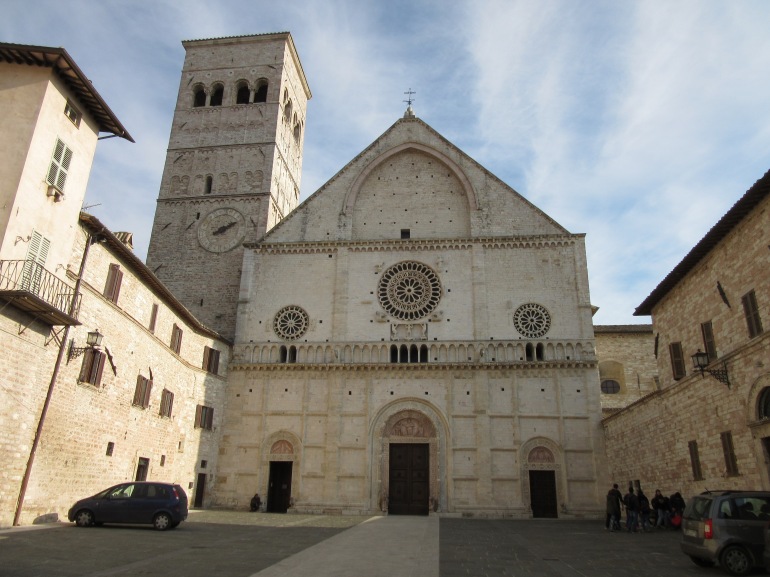 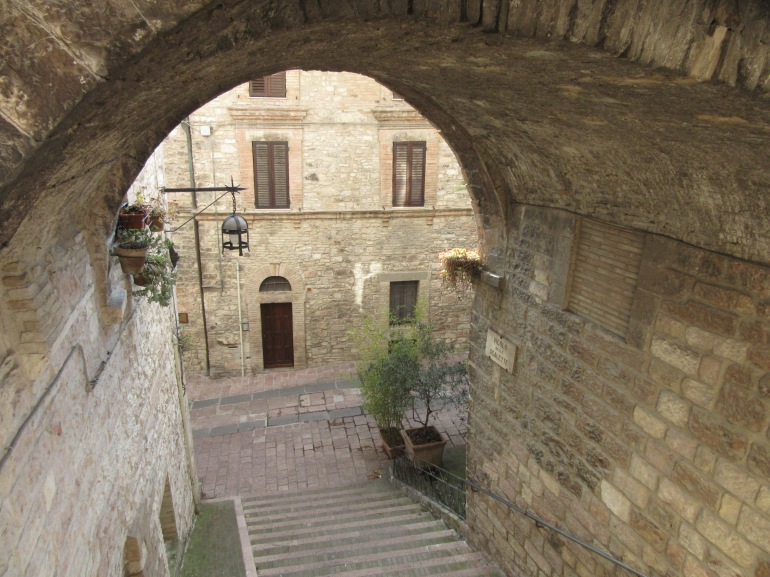 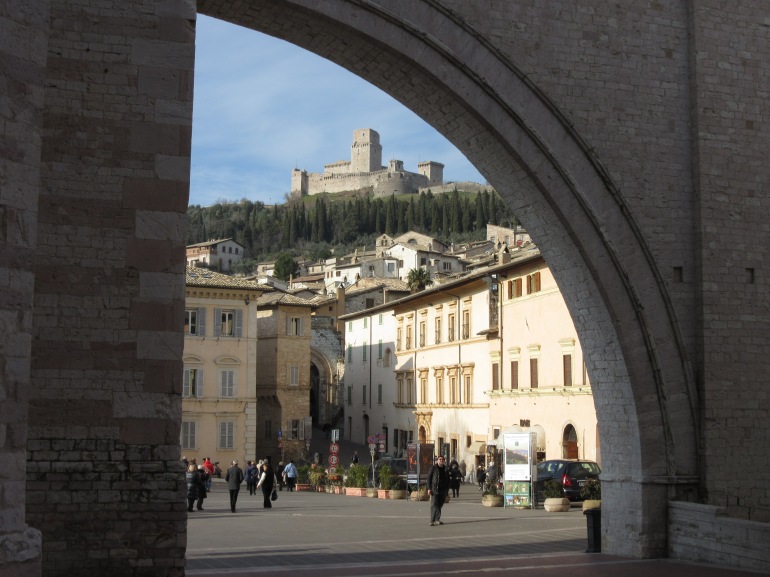 The fort can be seen through the buttresses of the Church of St Clare (Basilica di Santa Chiara). 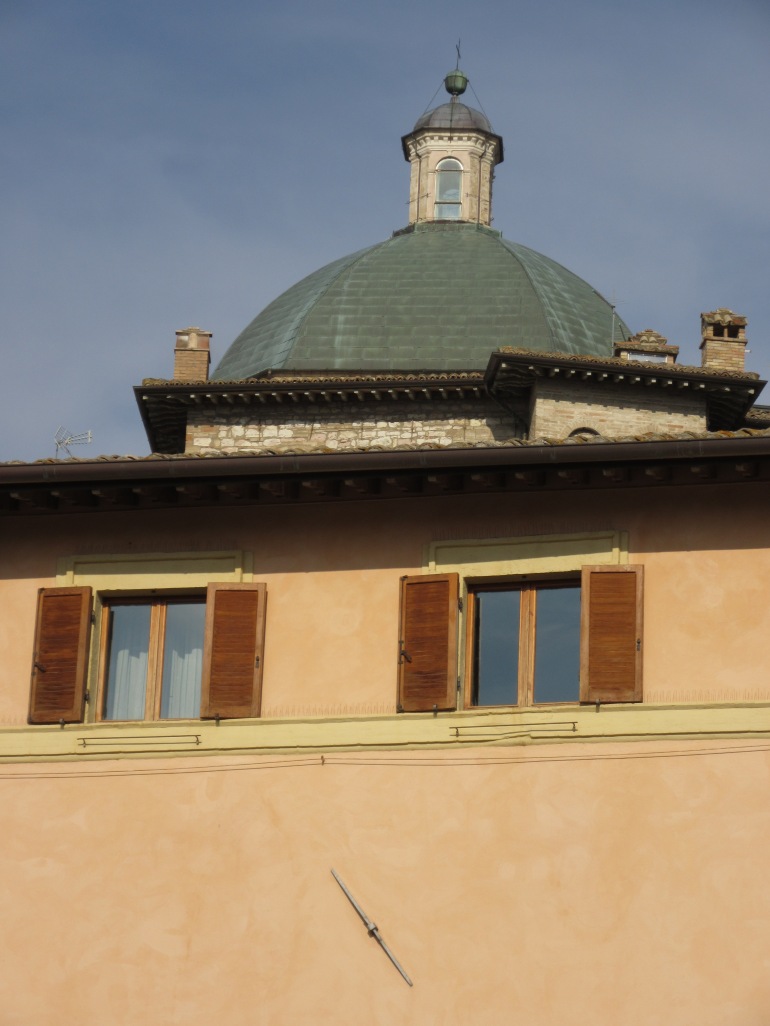 Olive groves even in the heart of the city, below the Basilica di Santa Chiara 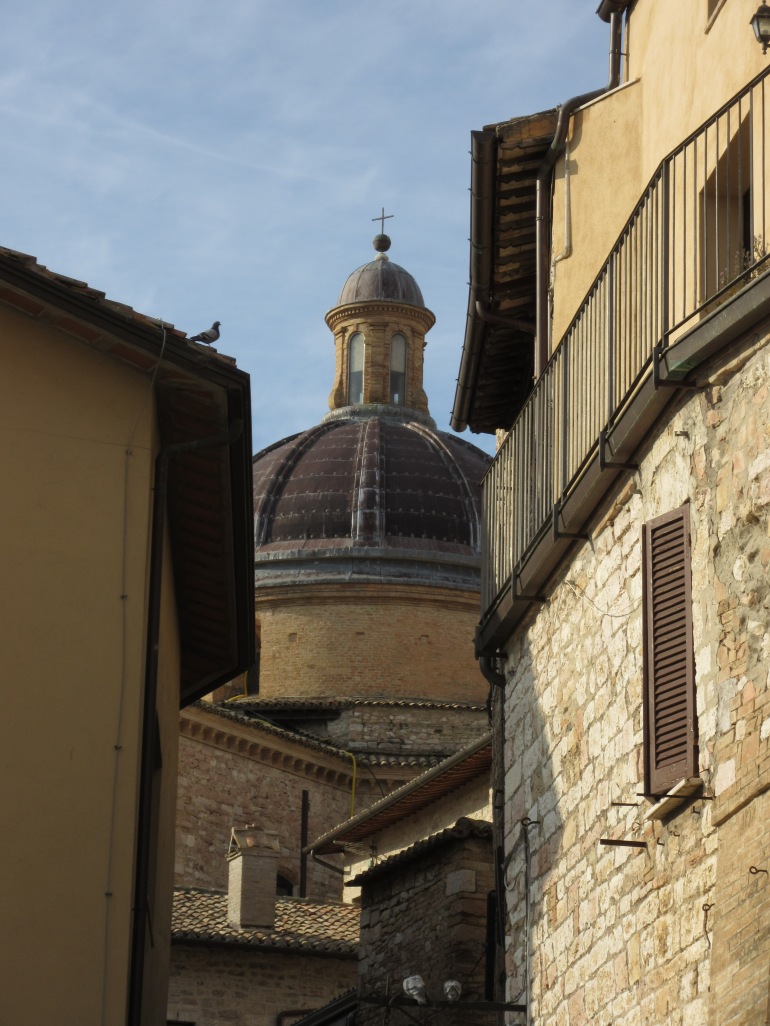 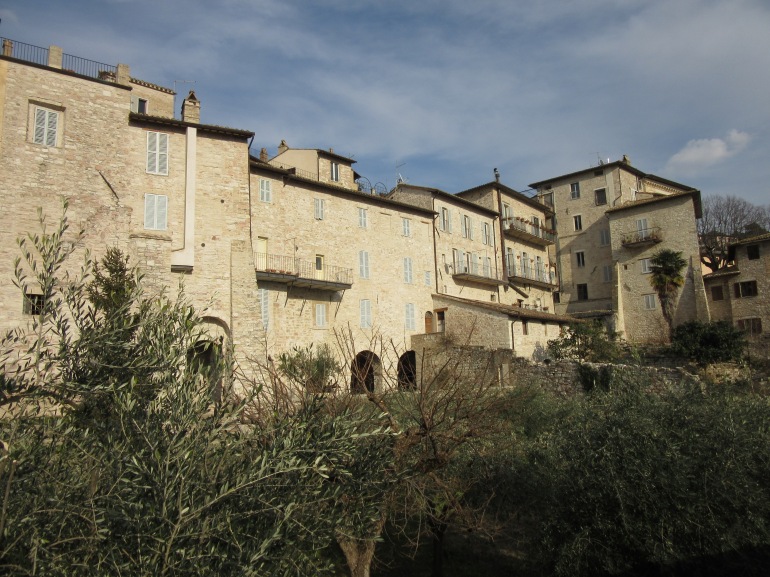 Breaking out of the encircling City walls and heading through olive groves before climbing again back into the city. 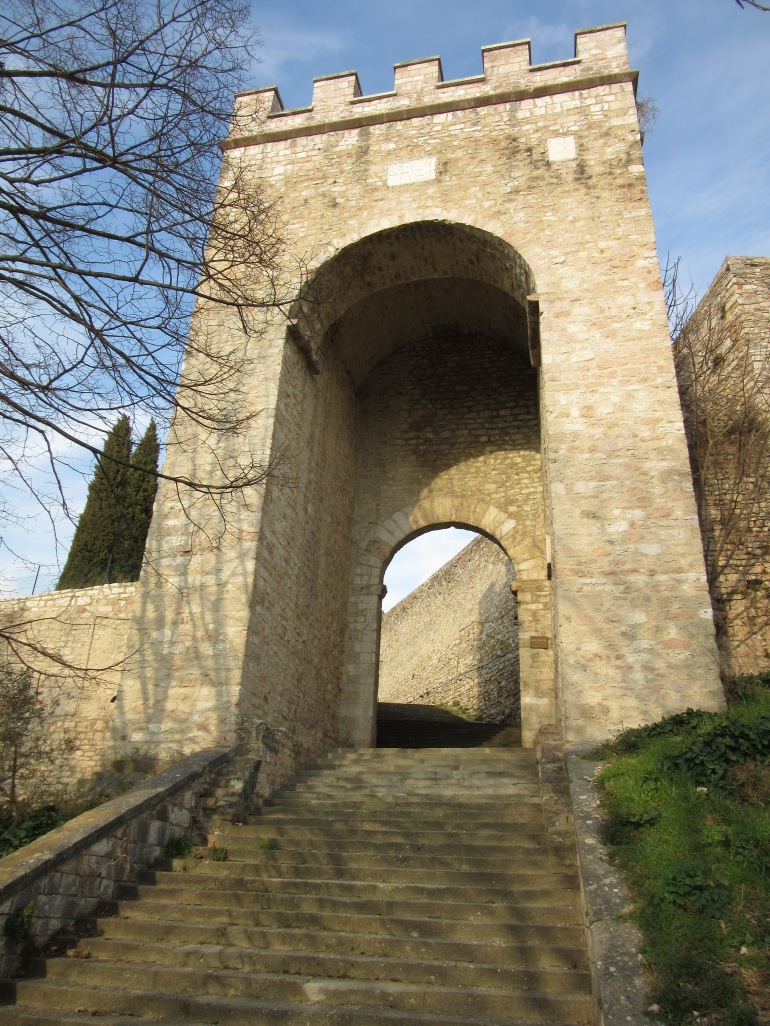 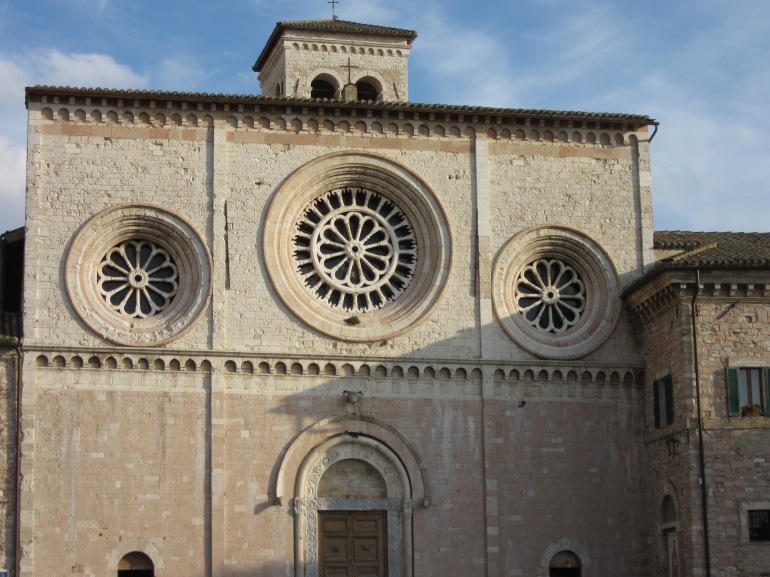 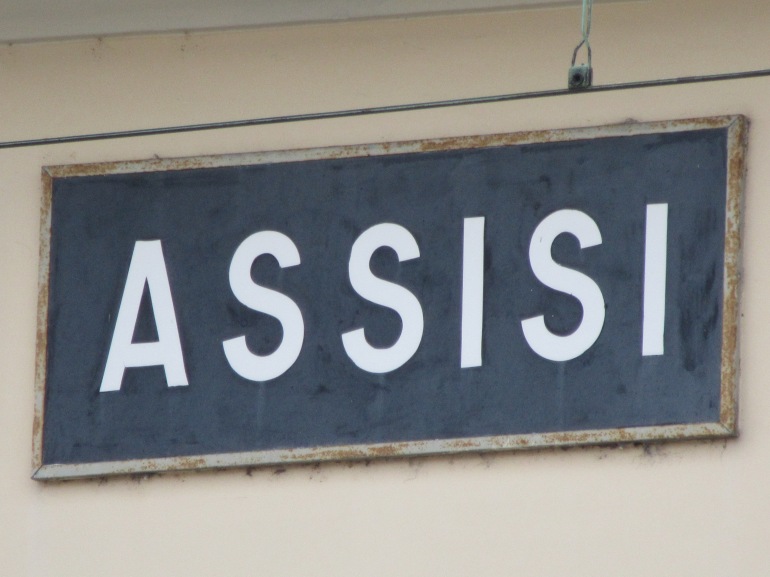 Heading back to the hotel, past the railway station. 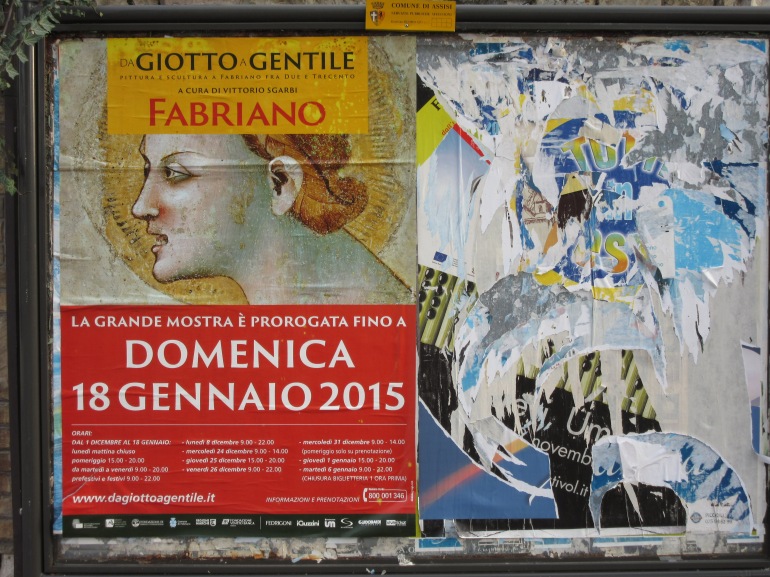 …and taking the bus back into the city in the evening. Eerily quiet, hardly a soul about (though I later discovered one reason for this), I felt as if I had the place to myself. Excepting the street lighting, Assisi felt ancient, timeless. 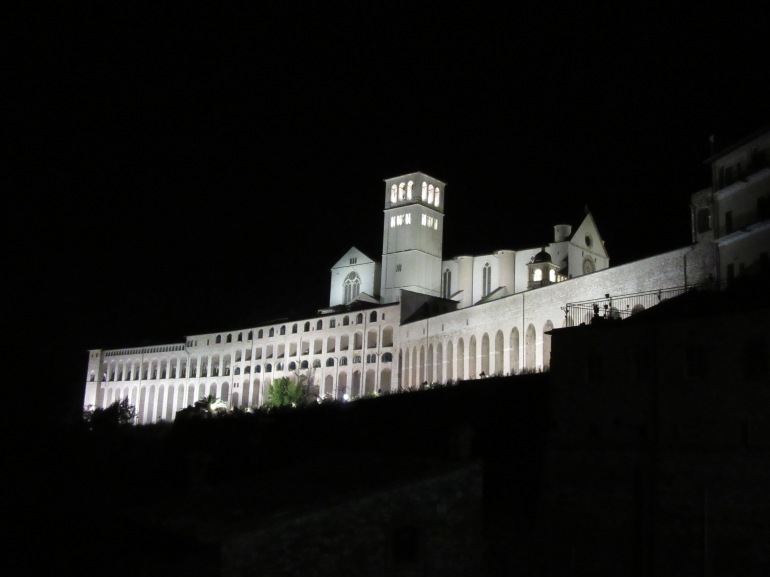 After supper, the bus back to Santa Maria degli Agneli which was opening its doors after the regular Saturday night candlelit procession and service, hundreds of folk streaming out of the doors into the night. The Porziuncola, inside, is the most sacred place of the Franciscan Order of the Roman Catholic Church. St. Francis of Assisi himself died here.

And that was my introduction to Assisi, a perfect taste of the city on a beautiful sunny day – and setting me up for the weekend, my course and the wonderful world of roses, of which more, later….