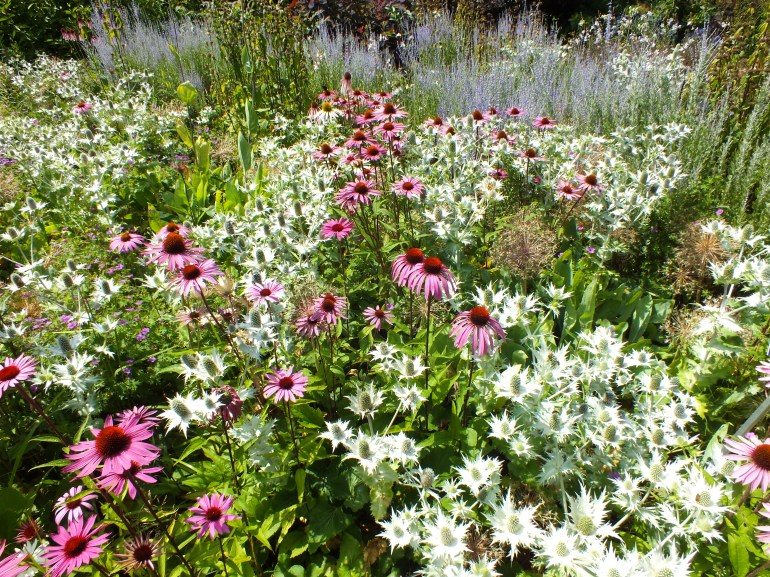 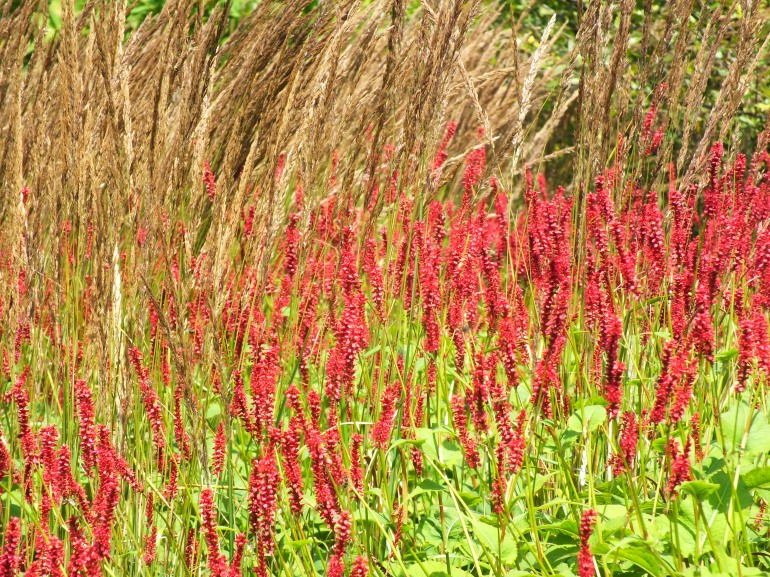 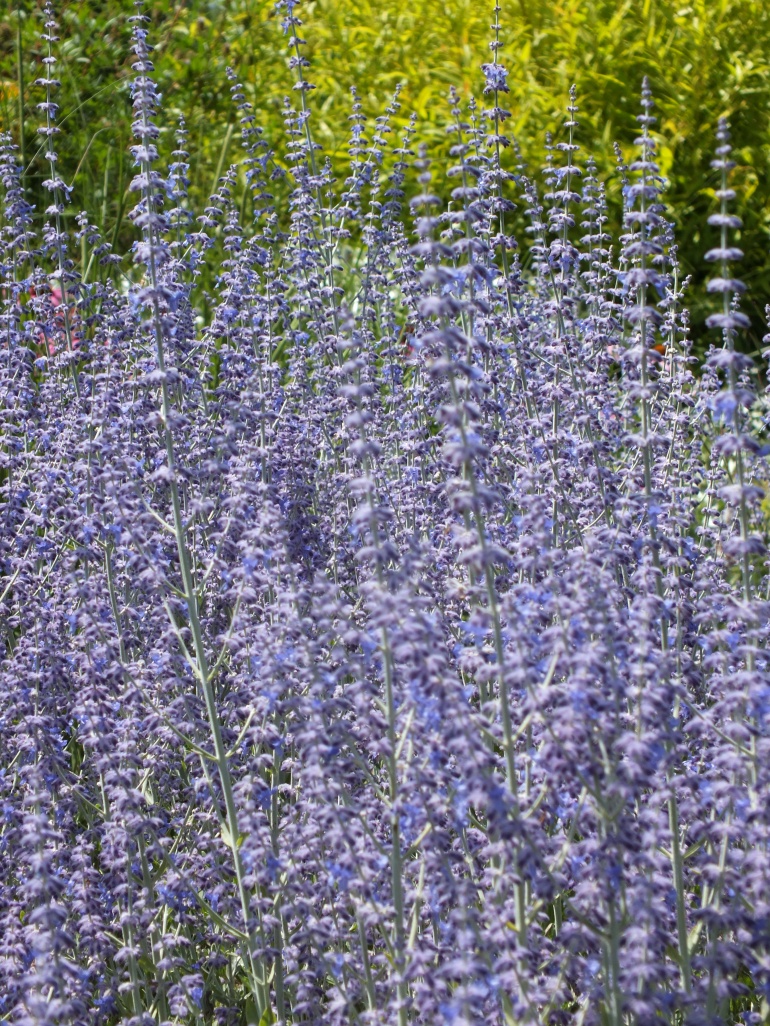 I’ve written about these borders before, the wide double near-mirrored plantings mixing grasses with perennials backed by taller shrubs (some coppiced like the Cotinus) and trees. Striking combinations include the Echinacea with the Eryngium Silver Ghost, and the superb Sanguisorba Red Thunder mixing in with the grasses – likened to a swarm of angry raspberries! The bright sunshine even so has bleached much of the colour from these images (it is no coincidence that great garden photographers often take their best shots at 5am in the morning – Wisley do stay open later in High Summer, where the warm light is kinder to photography, but an early-bird session would be helpful too).

From the vantage point of the fruit mount the ribbons of planting is much clearer – the structure seems to dissolve as you walk down towards the lake but it still holds the scheme together, keeping it from chaos. Gravel paths at intervals leading into each border give a different perspective

Based on an original concept by the Dutch garden designer Piet Oudolf, the borders were planted in 2001, with predominantly North American prairie species. Since then, these borders have retained his inspiration for naturalistic planting as they’ve evolved over the years to suit their setting.They’re laid out in diagonal strips or ‘rivers’ with the original design using roughly three plants in each river, with the same plants used more than once with different partners in other rivers – a great way to explore planting combinations.  When you stand at the top of the Fruit Mount you get the full view of the rivers and the design as a whole. As the seasons progress, the plant combinations change, and overall we get ten months of interest.

The ethos is a mix of a modern and traditional. The modern approach to gardening is from designers like Ouldolf, where plants are left to grow as they are, without staking, feeding or irrigation. But these borders mirror the shape of the traditionally English, cultivated, Mixed Borders at Wisley. Horticulturally, they are in stark contrast in the way they are managed.

As the summer progresses, purple Veronicastrum ‘Adoration’, V. virginicum ‘Fascination’, and the lilac-coloured V. virginicum ‘Lavendelaturm’ as well as Phlox paniculata ‘Blue Evening’ bloom, giving continuity of the blue-purple colour scheme.
Mid-summer: The borders are in full flow with Echinachea playing a starring role, mixed in with grasses such as Molinia caerulea subsp. arundinacea ‘Karl Foerster’ and Calamagrostis x acutilflora ‘Karl Foester’.
Stretching effortlessly throughout the rivers is Eryngium giganteum ‘Silver Ghost’ AGM. Drifts of cool colours come from Echinops ritro ‘Veitch’s Blue’ and Pervoskia ‘Little Spire’, while in the shrub layer the rarely grown Glycyrrhiza yunnanensis is complemented with the pink flowers of Sambucas nigra f. porphyrophylla ‘Gerda’ AGM.
In late summer/ early autumn Gaura lindheimeri ‘Whirling Butterflies’ and Eupatorium maculatum (Atropurpureum Group) ‘Purple Bush’ AGM are two of the late summer flowerers along with Helenium ‘Riverton Beauty’.
In mid autumn, shimmering grasses are the key attraction along with the graceful, fading, herbaceous seed heads. The borders have evolved into colours of gold and yellows that look stunning in the sunlight. Many species of birds enjoy the chance to feed on the seed heads which will stay standing well in to winter. At the rear of the borders there are several forms of Cotinus coggygria, (smoke bush), Salix alba ‘Yelverton’ and ‘Aurea’ and Cornus sericea ‘Cardinal’ all showing their fantastic autumn colours of reds, browns and yellows.
In winter, the seed heads look wonderful on a frosty day. We leave them until late winter before cutting them down in time for new growth to start in spring.

Over the years many plants have come and gone, gradually moving away from Ouldolf’s original plan but the philosophy of lower maintenance horticulture, with an emphasis on long seasonal interest grasses and perennials that thrive in the free draining, lower nutrient ground remains.

From my own back catalogue –