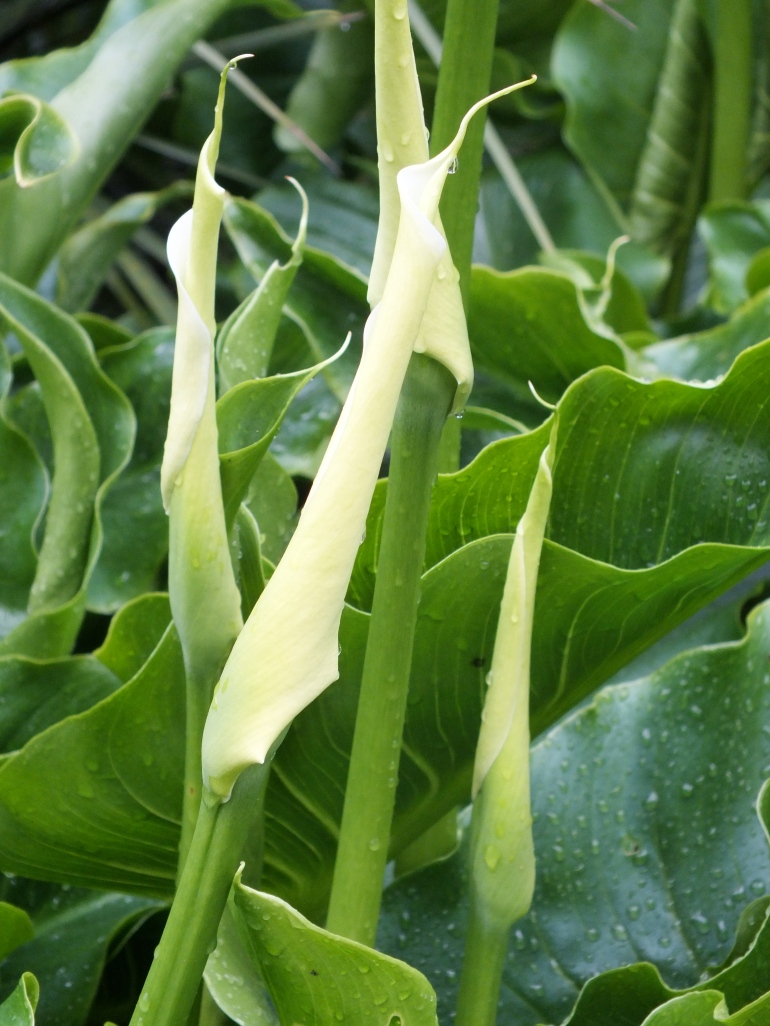 A chance to stop off at Kew Gardens this afternoon – between rain showers happily – and to see what surprises there might be (for there are always surprises in these very varied gardens).

Having paid up for an annual membership (given that they need the money and since I haven’t found my way back to the Sir Harold Hillier Gardens in Hampshire to renew my membership there – this includes complimentary access to both Kew Gardens and Wakehurst Place), I walked through the wild/species rose gardens, and on to the Water Lily House. Thence out to the Duke’s Garden, Davies Alpine House, Rock Garden – the Peony beds and finally the Woodland surrounding the Temple of Aeolus.

These pictures – the first of my usual ‘many’, are from a very generous stand of Arum lily in a shady part of the Duke’s Garden. Quite, quite glorious!

The striking arum lily has been known to European horticulture since at least the 1660s and is one of the world’s most iconic and widely known plants.

Not of conservation concern.

The rhizomes are edible, although the plant is reportedly toxic.

Zantedeschia aethiopica is one of the world’s most iconic and widely-known plants. Although commonly known as the arum lily or calla lily, it is not a lily at all but an aroid, with its brilliant white spathe (floral bract) surrounding the central pale yellow spadix (floral spike) bearing tiny flowers.

This very attractive plant has been known to European horticulture since at least the 1660s. Carl Linnaeus described it in 1753 as Calla aethiopica and it has been commonly known as the calla lily ever since. The species epithet ‘aethiopica‘ refers to the fact that it is native to Africa. In 1826 Sprengel transferred it to a new genus which he called Zantedeschia. According to Cythna Letty (1973), the name was probably given in honour of Giovanni Zantedeschi, an Italian botanist who lived in the early 19th century.

The arum lily is native to Southern Africa (provinces of Limpopo, North-West, Gauteng, Mpumalanga, Swaziland, Free State, KwaZulu-Natal, Lesotho, Western Cape and Eastern Cape), where it grows in marshy places from 20 to 2250 metres above sea level. It is also widely naturalized throughout the tropics.

The arum lily is well known for its striking appearance when in flower, with a brilliant white floral bract wrapping around a yellow finger-like projection in the centre. The flowering parts arise from a ring of glossy green leaves. The fruits are green berries which turn orange at the base when ripe.

Zantedeschia aethiopica is a perennial herb growing up to 60 cm tall (or taller in the shade). It has a thick, fleshy, underground rhizome (swollen stem).

The leaves are evergreen, hairless and form a rosette. The leaves are somewhat leathery, and usually broadly oval with lobes at the base. The inflorescence (flowering part) is on a stalk up to 60 cm long. The spathe (floral bract) is about 15 cm long and 12 cm wide. It is ivory-white on the inside and the outside is bright green at the base and gradually becomes white towards the top. The lower part forms a wide-mouthed funnel, and the much wider upper part spreads out with its tip curled under. The spadix (floral spike) has an upper zone of about 7 cm long, which is covered with tiny bright yellow anthers (male parts). These produce slender threads of white pollen when ripe. The spadix also has a lower zone, which is covered with yellow-green to whitish pistils (female parts) interspersed with mushroom-shaped sterile structures. The fruits are green berries which become soft and orange-coloured at the base when ripe.

Due to its striking inflorescences, Zantedeschia aethiopica is very popular as cut flowers and as an ornamental. It is used as a symbol of purity in bridal and funeral flower arrangements.
In southern Africa where it occurs naturally, the leaves and rhizomes are traditionally used in dressings and oral preparations for a variety of complaints. The rhizomes are edible, although the plant is reportedly toxic.

Scientists have shown that Zantedeschia aethiopica may be useful in artificial wetland systems to clean waste water and prevent algal growth.

This moderately hardy monocot can be grown outside in the UK, but at Kew is sheltered under the glass of the Temperate House. In any position it will grow best in moist soil or shallow water. In its natural habitat it can be deciduous or evergreen, depending on the rainfall and soil water rather than temperature. The position in which it is planted will also determine size and flowering. Planting under shade is preferable if there is no boggy position for this plant, but this will reduce the number of flowers and result in a smaller plant. Fertile soil is required. In optimum conditions a good display of flowers can be enjoyed in the spring and summer.

Propagation can be by seed or division. Seeds can be removed from the pulp of the fruit when it has turned yellow and soft. The seeds should then be dried off for sowing in the spring. They should be sown sparingly to allow space for the fleshy roots to form. A seed compost should be used and the seeds covered lightly. Division of the fleshy rootstock should be done when the plant is dormant. It can then be planted at a depth of 5 cm.

Kew’s Millennium Seed Bank Partnership aims to save plant life worldwide, focusing on plants under threat and those of most use in the future. Seeds are dried, packaged and stored at a sub-zero temperature in our seed bank vault.

You can see Zantedeschia aethiopica growing at Kew in the Duke’s Garden, on the south side by the wall.

Plant profile from the RHS –

In Kew’s early days, Princess Augusta’s advisor on all things botanical, Lord Bute, lived in Cambridge Cottage. In 1772, King George III acquired it, and his sons Princes Edward and William moved in. Subsequent inhabitants were the 1st Duke of Cambridge (Adolphus Fredrick) after whom the garden takes its name, and the 2nd Duke of Cambridge.

Kew acquired the cottage and land in 1904. The garden is called ‘Duke’s Garden’ rather than ‘Cambridge Cottage Garden’ to avoid it being confused with a classic ‘cottage garden’.

Things to look out for

Seasonal beds frame large, manicured lawns. One exhibits gold, orange and red plants, such as Hemerocallis ‘Burning Daylight’ or Lychnis chalcedonica. Another contains violet-hued plantings, and incorporates a lavender trail containing a variety of species and cultivars. Meanwhile, the ‘exotic bed’ is a testing ground for seeing just how hardy some tender plants are. This contains exotics such as tree ferns, ornamental bananas, cannas and gingers.

With the advance of climate change, and the need for gardeners to be more economical with water use, Kew has created a ‘Gravel Garden’ within the Duke’s Garden. Sponsored by Thames Water, this contains plants that are drought tolerant. Growing beneath the shade of a large American hophornbeam (Ostrya virginiana) are nerines from South Africa (Nerine bowdenii), euphorbias (Euphorbia myrsinites) and wand flowers (Dierama pulcherrimum) and other plants that thrive in warm, arid conditions.