Just on my doorstep, a bright sparky tulip to set me on my way – and amid a street full of blossom, something a little darker than the usual bubble-gum pinks many Cherries adopt – 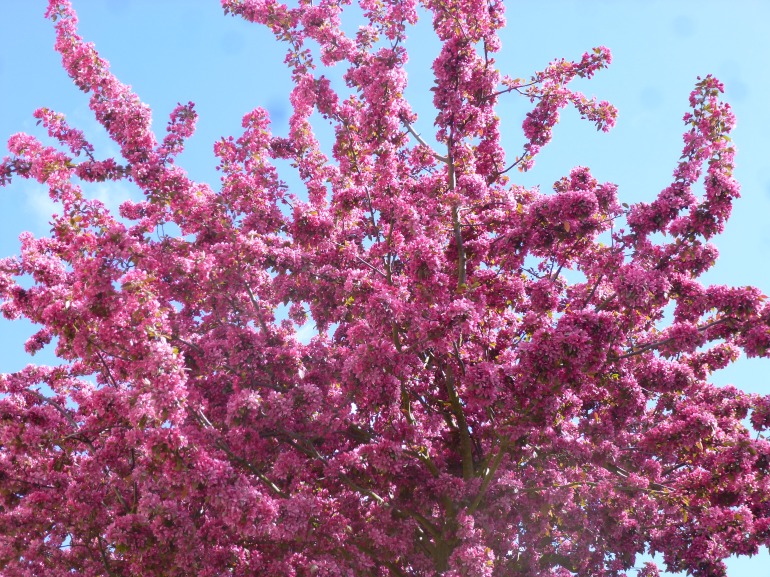 And on to my first job, a local garden with a lawn more moss than grass – a fine, deep bouncy crop of moss  – and my plans to eradicate it.

First step, cutting the grass relatively short – it is not the first cut of the season so it can be a tad on the short side. Step two – bring in the Moss-terminator… An electric lawn rake or scarifier really takes the pain out of removing moss and a build up of thatch in any lawn and is a useful part of any annual lawn maintenance regime. Where moss has been allowed to build up to this extent, it is invaluable.

I recently bought a Bosch lawn raker, which has a rotating drum with a series of metal strips which create a series of parallel cuts in the turf, and in the process lifts out the moss and any layer of thatch in the lawn. This will aerate the lawn and improve the drainage. It can be set at different depths and the next time I repeat the process, in a couple of weeks, I’ll set it at the lowest/deepest setting for maximum benefit.

Clearing the thatch will in itself help the drainage and prevent water from sitting on the lawn surface – moss likes badly drained, damp conditions and shaded lawns especially. After going over the lawn twice, and giving it another cut, in part to make sure I have collected all of the grass, thatch and moss from the lawn surface, I’ve used a Spring moss killer, weedkiller and fertiliser treatment. This will blacken the remaining moss within the next two weeks whereupon I can rake out the rest. There may be bald patches which I can then reseed with a suitable seed mix (maybe something for a shadier lawn) and I might reseed lightly across the whole lawn, as I suspect I will be removing a significant proportion of what is presently ‘green’ by the time I have worked on the area again with the lawn raker.

I was emptying the hopper every couple of meters and quickly built up a giant bag of moss and thatch – with very little grass.

You can see how compact the lawn raker is but my, what a job it does!

Meanwhile, butterflies and bluebells – and white-bells and rosy-bells to admire… 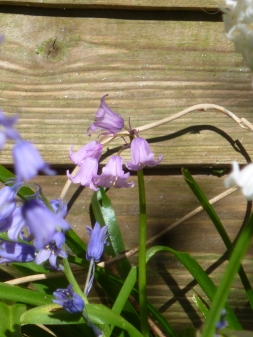 Next, a short drive to a garden originally planted up last Spring (was there a Spring last year? It was so cold!) The planting around a circular lawn is beginning to fill out and the climbing rose Crown Princess Margareta is making good progress along the buff-coloured brick wall. Painting the fence a dark colour has worked really well I think, showing off the greenery without being dominating (as it was when pine-tinted).

Containers filled with a lasagna of tulip bulbs last Autumn are coming into their own – there are orange Imperial Fritillaries elsewhere – with more surprises to come, if memory serves. 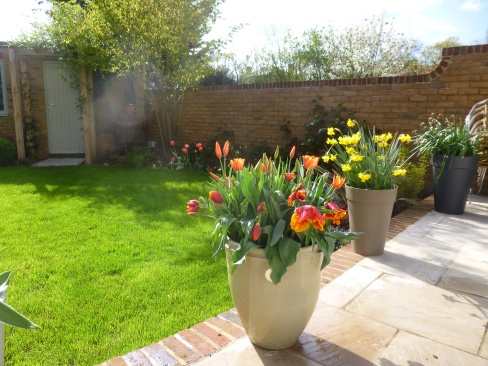 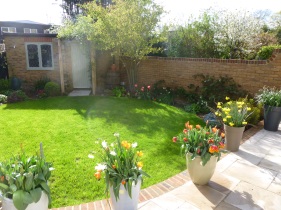 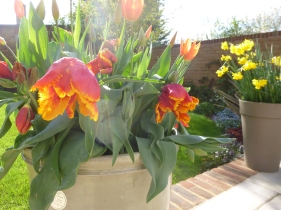 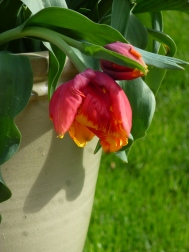 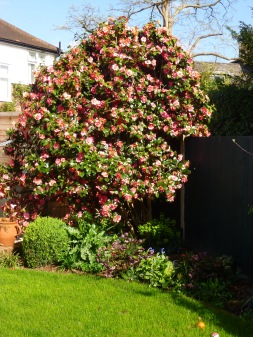 I was actually there to look at the front garden, which has just been altered to lose a lawn and gain additional parking – and ironically bigger borders. A blue and white scheme is needed, for a space that is open, but not in the sun, from about 2pm onwards. Thinking caps on.. 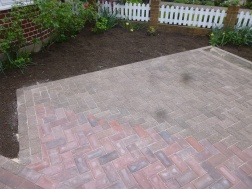 after.. some dark pink gravel going into the channel there..

After calling in at Greenford Recycling Centre to dispose of the mountain of moss, over to Kew, to check on this garden, cut the grass and check on the moss-regime there – looking good! – and to pick over the potted primroses, move the pots of daffodils and narcissus out of the way now they have gone over and look through the tulips displays planted out late last year… 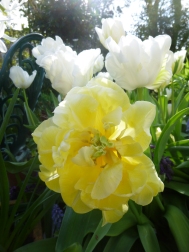 The lawn here is shaded, was immensely compacted and full of moss. Scarifying it (by hand the first time, last Autumn) left big, bald patches in the lawn but I needed to address the compaction before anything else could be done. Several more hours of lawn spiking later – with a garden fork (a hollow-tined aerator proved ineffective)…

My new WMD – weapon of moss destruction – the Bosch lawn rake – took the pain out of clearing more moss and thatch earlier this year and has significantly relieved the compaction and helped the drainage too. I’ll use it once more next week and reseed with a shady lawn grass seed mix, using a generous amount of lawn sand to boot.  Already the lawn is looking so much healthier and the moss is definitely in retreat…

The tulips displays are beautiful  – with much more to come. I will have to look back at my notes for the names, particularly for the big, doubled-ruffled golden cream tulip, fully open in the sunshine. There were hyacinths – white and dark blue – and the cleaned-up primroses are in shades of cream, yellow, gold, pale blue and indigo.

Enough I think for one day – time to head home…

One thought on “A day in the life… lawncare – how to deal with moss (see WMD’s), tulip displays, a bit of planting and planning a blue & white border….”