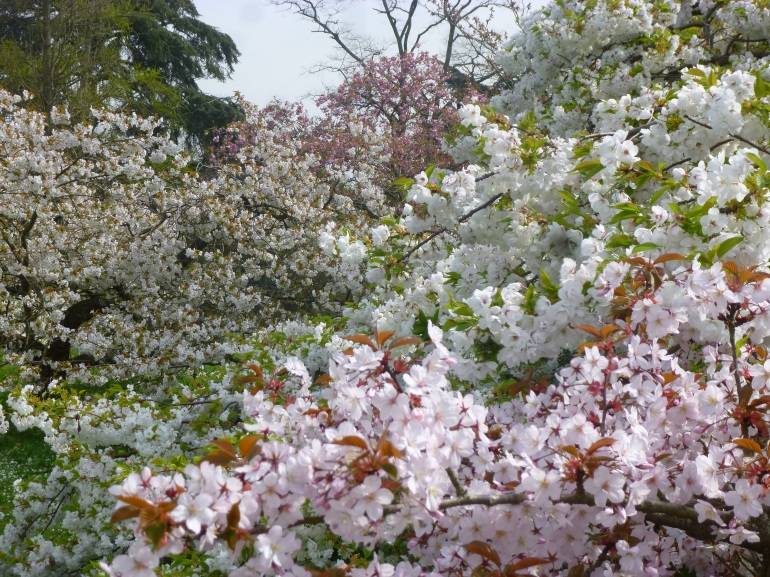 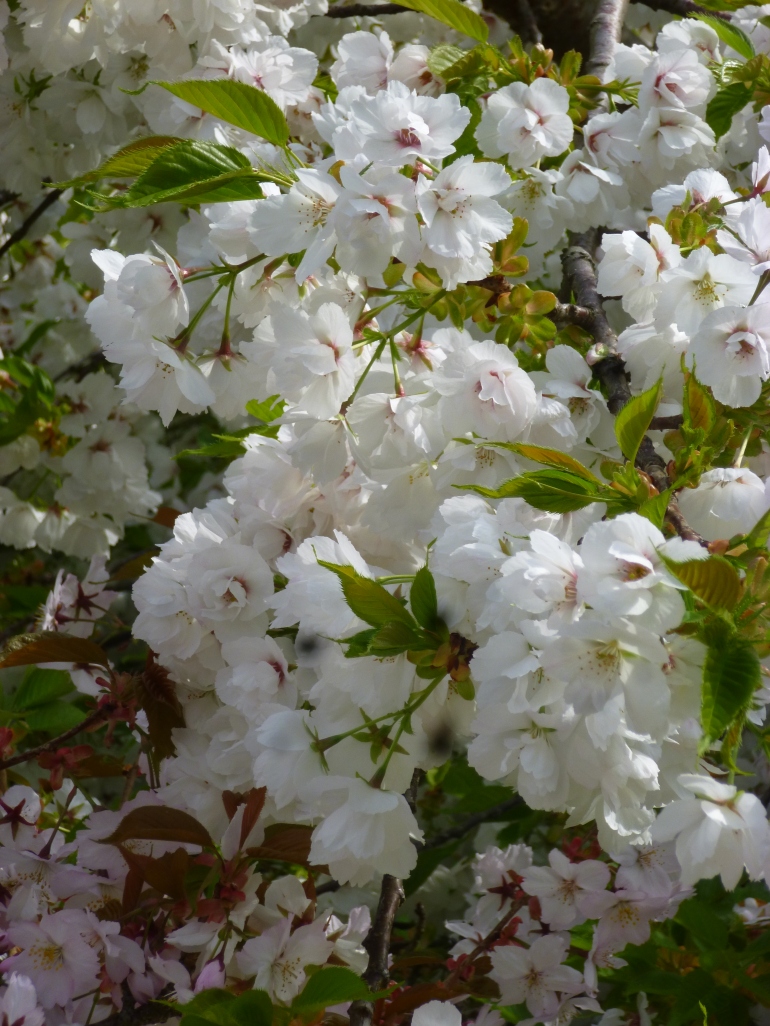 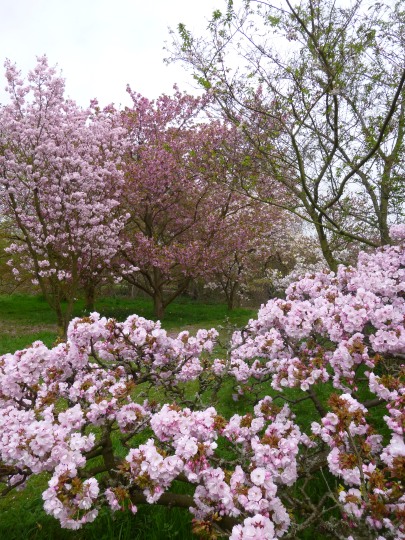 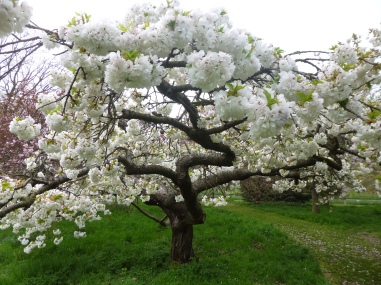 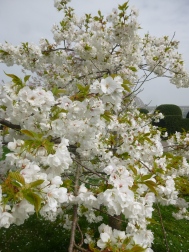 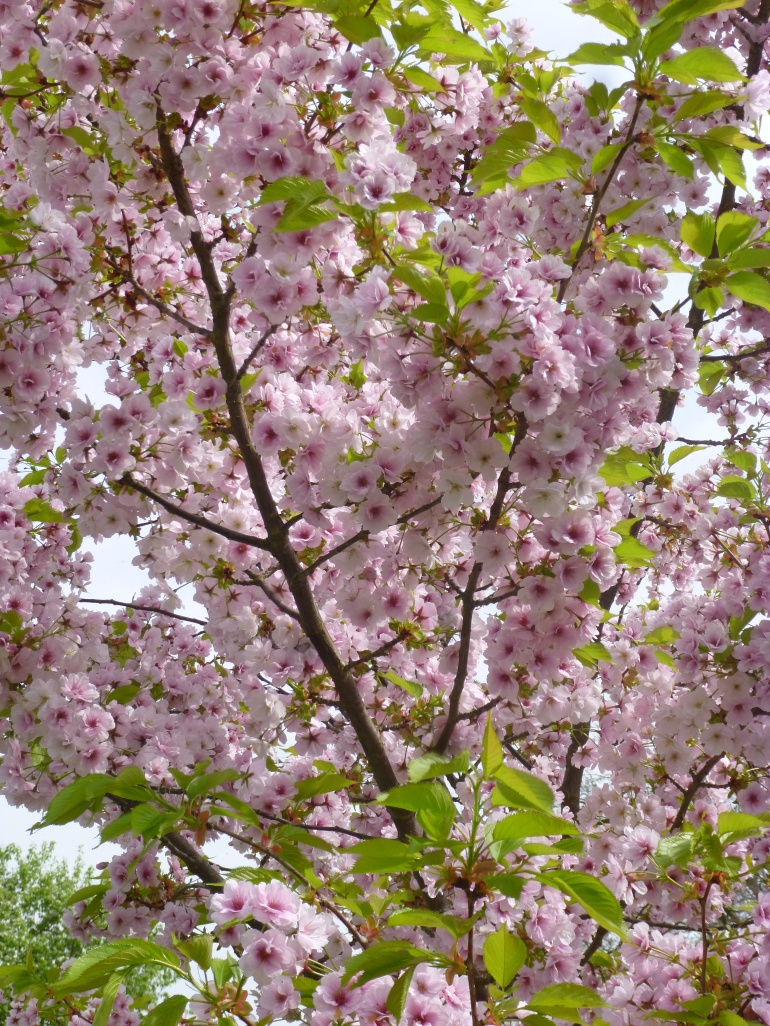 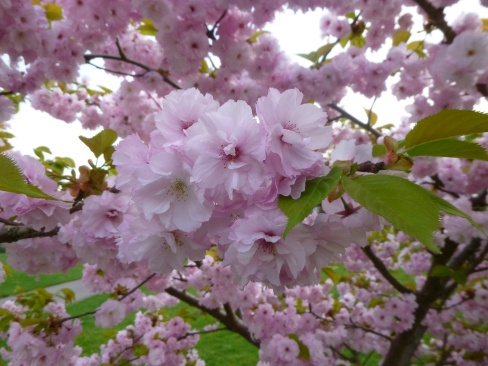 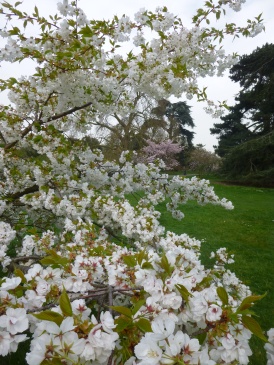 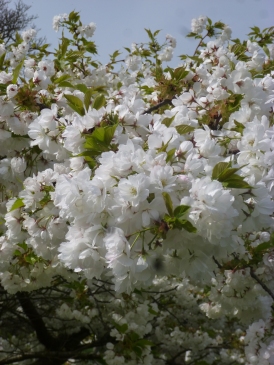 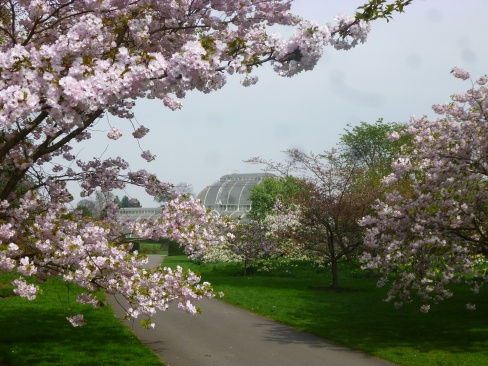 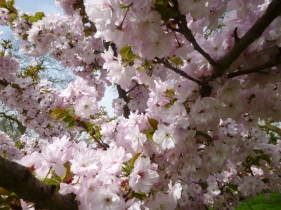 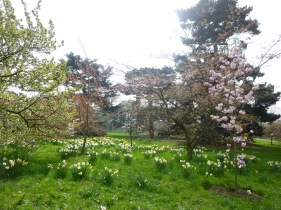 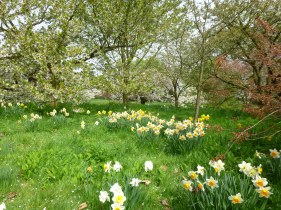 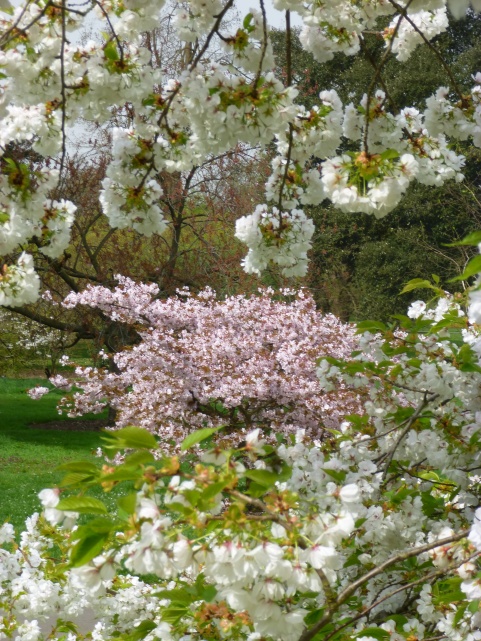 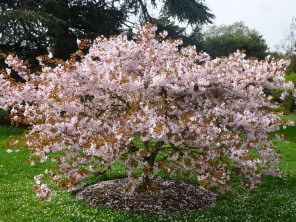 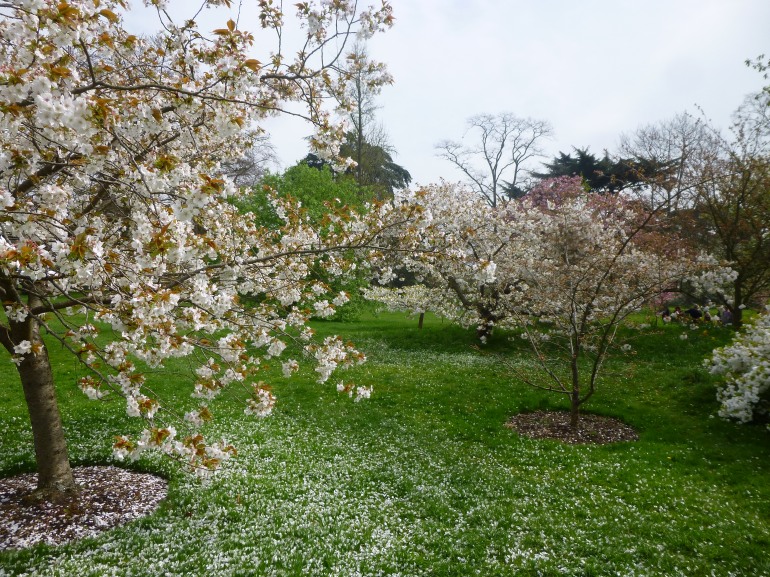 Crab-apples and wild pears, Amelanchier and the last of the magnolias were also in flower, but the cherries, by dint of the sheer exuberance of their display, won me over completely. Against green grass studded with daffodils, the scene was near perfect.

If this is not enough, then a trip to Japan should be urgently considered – Adam Bridge, writing recently in The Telegraph, has  details for your travel itinerary

After what has been a particularly harsh winter, the people of Tokyo are this week formally celebrating the arrival of spring and the much-loved “sakura” – or cherry blossom – seen as the national flower and a great symbol of hope and renewal.

Popular viewing spots in the city include the parks at Ueno and, close to the district of Harajuku, the Yoyogi. For the next two weeks they will be thronged with people coming out to marvel at the brilliant displays of colour – primarily pink but also deeper shades bordering on red and white – and the sweet fragrances of a flower that, like the almost perfectly-formed Mount Fuji, occupies a very special place in the hearts and psyches of the Japanese.

The viewing phenomenon – also called the hanami – has been celebrated for centuries. It is often accompanied by the consumption of food and drink and the singing of songs that celebrate the transient beauty of the cherry blossom, which usually flowers for between one or two weeks, starting in late January in the tropical islands of Okinawa and stretching into May in the northern reaches of Hokkaido.

For Japanese students, this period coincides with the end of one school year and the start of the next; for older Japanese, the festival also heralds a new beginning.

The arrival of the cherry blossom is keenly anticipated, with round-the-clock news reports providing updates on exactly where and when the fabled flowers will appear alongside all manner of sakura-themed promotions. Advertisements currently on display in the Tokyo Metro suggest that drinking Kirin beer will enhance the hanami experience, and should you be feeling peckish, McDonald’s has helpfully introduced a “cherry blossom burger”, complete with “pink buns”.

And people do not wait for the formal opening of the sakura season. In Tokyo, battered in February by severe snow storms, beautiful spring-like weather last weekend brought out the crowds at the Shinjuku Gyoen, a wonderful leafy sanctuary just minutes away from the blazing neon of one of Tokyo’s most frenetic hotspots.

One or two cherry blossom trees were already in bloom and as teenage girls cooed their delight as they posed for the ultimate mobile phone “selfie”, more seasoned visitors, armed with heavy duty photographic equipment, spent hours trying secure the best angles and lightings.

In a city not known for its abundance of natural beauty (or indeed green spaces), there was a lovely lightness in the air; the joy of renewal.

“The delicate and brief nature of the cherry blossoms are not only a reason for a good party; they are also seen to symbolise the ephemeral nature of life, an aspect of Japanese culture that is often associated with Buddhism,” said Kylie Clark of the London office of the Japan National Tourism Organization. “The temporary nature of the sakura is a reminder that all living things soon pass and we should make the most of our lives while we can.”

Where – and when – best to view the cherry blossom

Nagoya Castle is one of Japan’s greatest castles and home to a wealth of cultural treasures. In cherry blossom season it is the place to view somei yoshino and weeping cherry trees and other rare varieties around the park and moats of the castle. The trees are illuminated by night.
Flowering season: late March to early April

Kumamoto Castle is one of the three most famous castles of Japan, enhanced in the spring by some 800 cherry trees – Somei-yoshino as well as mountain cherry trees (yama-zakura) and Higo-zakura.
Flowering season: late March to early April

Ueno Park is one of Japan’s most crowded, noisy and popular cherry blossom spots, featuring more than 1,000 trees along the street leading towards the National Museum and around Shinobazu Pond. As an added bonus the trees are lit up in the evenings.
Flowering season: late March to late April

This garden was traditionally the location of the samurai residence of the Naito family. The garden was later designated as an Imperial garden, and then, in 1949, as a national garden. It has been famous for its cherry trees since the Meiji Era (1868-1912), and today is one of the most popular spots in Tokyo to enjoy the spring blooms.
Flowering season: late March to late April

Maruyama Park is the oldest park in Kyoto and is renowned for its huge weeping cherry trees, best viewed at night. The season continues for most of April, as trees on the mountainside start to blossom while those in the park begin to fade. The Philosopher’s Path is a track along which there is a vista of cherry blossoms on both sides of the river path from Lake Biwa-ko. The cherry blossom petals floating on the water add to what is already a beautiful and atmospheric walk taking in a number of historic monuments.
Flowering season: late March to late April

The area which is today called Arashiyama was traditionally famous for the colours of its autumn leaves and has been praised in a number of Japanese poems. In april, however, cherry blossoms flower all over the area from Togetsu-kyo Bridge to Arashiyama-Nakanoshima Park, the bank of the O-i-gawa River, and Kameyama Park behind Tenryu-ji Temple. The best place to take it all in is the path along the Katsura-gawa River lined with 50-year-old trees that form a tunnel of cherry blossoms. The weeping cherry trees (shidare-zakura) in Tenryu-ji Temple are also splendid.
Flowering season: late March to late April

Nara Park is a historical park surrounding Todai-ji temple, Kofuku-ji temple and Shoso-in Repository. It has about 1,700 cherry trees of various kinds, including Narayae-zakura and Kokonoe-zakura.
Flowering season: late March to late April

Senkoji Park was built in 1894 by the chief priest of Senko-ji temple. There are nearly 10,000 cherry trees here, mainly comprising Somei-yoshino, but also including weeping cherry trees (shidare-zakura) and sato-zakura. In April, from the observation platform on the top of the mountain, you can enjoy a splendid landscape over the town of Onomichi and the islands of the Inland Sea.
Flowering season: early to mid-April

Mount Yoshino, located in the centre of Nara Prefecture, is said by many to be Japan’s best location for viewing cherry blossoms. In spring, approximately 30,000 cherry trees (mainly Shiroyama-zakura) start blooming from Shimo-senbon (the foot of the mountain) to Naka-senbon (halfway down), Kami-senbon (halfway up), and finally to Oku-senbon (the peak), displaying a gorgeous vista of flowers for as long as a month.
Flowering season: early to late April

When the cherry trees bloom around mid-April, the Japan Mint in Osaka opens a passage stretching for 560 meters, from South Gate (Tenma-bashi side) to North Gate (Sakura-bashi side), to the general public for one week. This area along the old Yodo River has long been famous for its beautiful scenery, especially in spring. In the Mint itself, there are about 120 different varieties of the total 370 extant varieties of cherry trees, such as Kanzan, Fugenzo, Shogetsu, Benitemari, Shibayama, Kizakura, and Yokihi.
Flowering season: mid-to late April

In the area surrounding Lake Kawaguchi, it is possible to view stunning cherry blossom displays – on a clear day against the backdrop of Mount Fuji. The blooms are to be found on the small cape called Ubuyagasaki on the eastern shore of the lake. Hanami heaven.
Flowering season: mid-April

The park containing Hirosaki Castle is one of the best spots for viewing cherry trees in the Tohoku region, north of Tokyo. For the best angles, walk along the castle’s western moat to capture the bright red Shunyo Bridge, stately castle tower, pale pink cherry blossoms, and snow-crested Mount Iwaki.
Flowering season: late April to early May

Kakunodate is located almost at the centre of the northern Akita Prefecture. The beautiful weeping cherry trees (shidare-zakura) and the classic samurai residences in Kakunodate have a history stretching back over 300 years. During the cherry blossom season, it is possible to take a two-kilometre stroll through the magnificent tunnel of flowering trees lining the Hinokinai River.
Flowering season: late April to late May

In the far northern island of Hokkaido, plum and cherry trees blossom at the same time. Goryokaku was a western-style fort built by the Tokugawa shogunate (1857-66) in the harbour city of Hakodate. The star-shaped ruins of the fort are now in a park full of cherry blossom trees.
Flowering season: late April to early May

The remains of Nangusuku (Nago Castle) are located almost in the centre of Okinawa Main Island. In the far south of the country, the blooms here come as early as late January and are generally the first to appear in the country. Some 20,000 cherry blossom trees with deep pink flowers (Higan-zakura) enhance the beautiful view of Yanbaru (the north of Okinawa Main Island), Nago City and Nago Bay from the observation platform.
Flowering season: Late January to early February

* For more information on how best to catch the cherry blossom season in Japan – and other attractions in the country, visit seejapan.co.uk

* For an up-to-date map detailing exactly where and when the sakura is due to arrive, see www.jnto.go.jp/sakura/eng/index.php