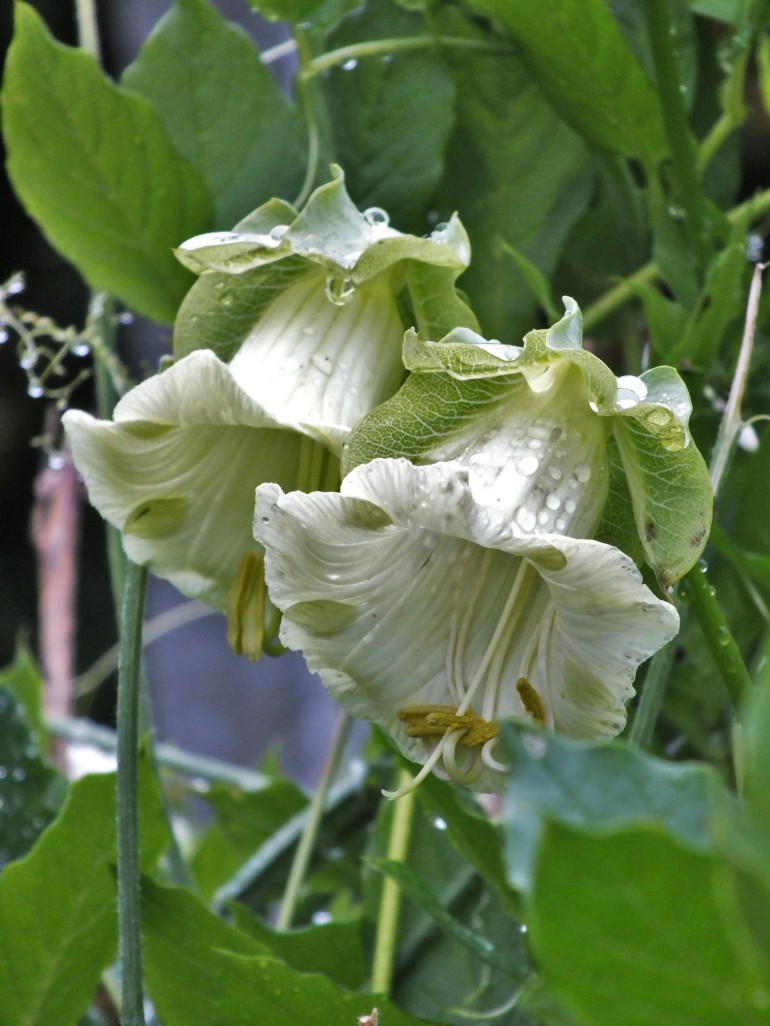 Cobaea scandens – the cup and saucer vine – is more commonly found with creamy-green-to-rich purple-fading-to-pale-lavender flowers though also in a ghostly white. Tender here in the UK, it is grown as an annual though these examples, in the Cutting Garden at Petersham Nurseries, survived through the mild and wet winter and continued to grow all through their second year. They have almost completely smothered the climbing Eden Rose on the archway in the middle of the garden and the whole thing has been in flower for months. Successive hard frosts will knock it back and may – really ought to – ultimately see it off. Fresh seed can be sown indoors very early next Spring and it will put on quite enough growth in the one season to be a show-stopper and the rose might be a little happier.

How to grow: Cobaea scandens

There is a seemingly unsolvable conundrum for the many gardeners among us who would like vertical interest and colour in summer without having to wait a year or two for shrubs or perennial climbers to develop sufficiently to flower well.

The simple answer is to sow the seed of annual climbers, which have the capacity to germinate, grow stupendously, flower generously and set seed within a few short months. They can be so imposing that they often transform the look of a garden – all for surprisingly little bother.

Annual climbers are, in fact, often perennials that are too tender to survive frost in winter. Lablab purpureus is one, Eccremocarpus scaber another, Maurandya barclayana a third, but my favourite is the beautiful and fast-growing Cobaea scandens.

This impressive climber makes a woody, evergreen perennial in its native Mexico. Here it grows 10ft or so over the summer and, from August (provided the seeds have been sown early enough) until the first frosts, produces very large and distinctive flowers that begin a greenish-white but turn to an inky purple with age.

The bell-shaped flowers are up to 2in in diameter and have a ruff of bracts – hence its common names, cup and saucer plant or cathedral bells.

These flowers are on longish stalks that hold them out in front of the leaves. There is also a white form (actually a very pale creamy-green) called ‘Alba’, which is harder to find and not quite so showy. The flowers, once they have developed, give off a very pleasant scent (they are pollinated in Mexico by bats). The leaves are 4in long, composed of four leaflets and a tendril with many little hooks on it, which it uses to climb; Charles Darwin was so impressed he studied cobaea for his book The Movements and Habits of Climbing Plants (1875).

Cobaea scandens will appeal to anyone who longs for something with panache and visual impact. It will also solve the problem, temporarily at least, of what to do with a bare wall space if something unexpectedly dies.

Cobaea scandens should be sown in late winter or very early spring, individually in small pots in seed compost, each seed set on its edge and thinly covered with more compost or perlite. Cover the pots with clingfilm to retain moisture and put in a windowsill propagator. Germination takes three weeks to a month. Once germinated the seedlings should be moved to larger (5in) pots with stakes inserted so that the young stems have something around which to twine. Grow them on at a cooler temperature. Harden them off carefully and put the young plants out in the garden when the danger of frost is past, against a sturdy trellis or close to a south-facing wall or fence on to which wires or netting have been attached. Cobaea does best in moist but well-drained soil, so water regularly in dry spells.

Cobaea scandens can be grown in a large pot (at least in diameter) in large cool greenhouse or conservatory, as long as suitable wires are provided for it to cling to. Any pot-grown cobaea needs copious watering and protection against glasshouse red spider mite. They will overwinter provided that the temperature at night does not dip below 5C.

Cobaea scandens has the capacity to swamp more genteel climbers, such as Clematis viticella cultivars or Rhodochiton volubile, which might look like suitable companions. However, if grown on a trellis or wall it will make a good backcloth to summer perennials growing in the border in front. Aster frikartii ‘Monch’, Echinops bannaticus ‘Taplow Blue’, Strobilanthes atropurpurea and Echinacea purpurea would all associate well, as do annuals like the green-flowered Nicotiana langsdorfii and N. ‘Lime Green’, and pink Cosmos bipinnatus. But this is a plant which can stand alone.