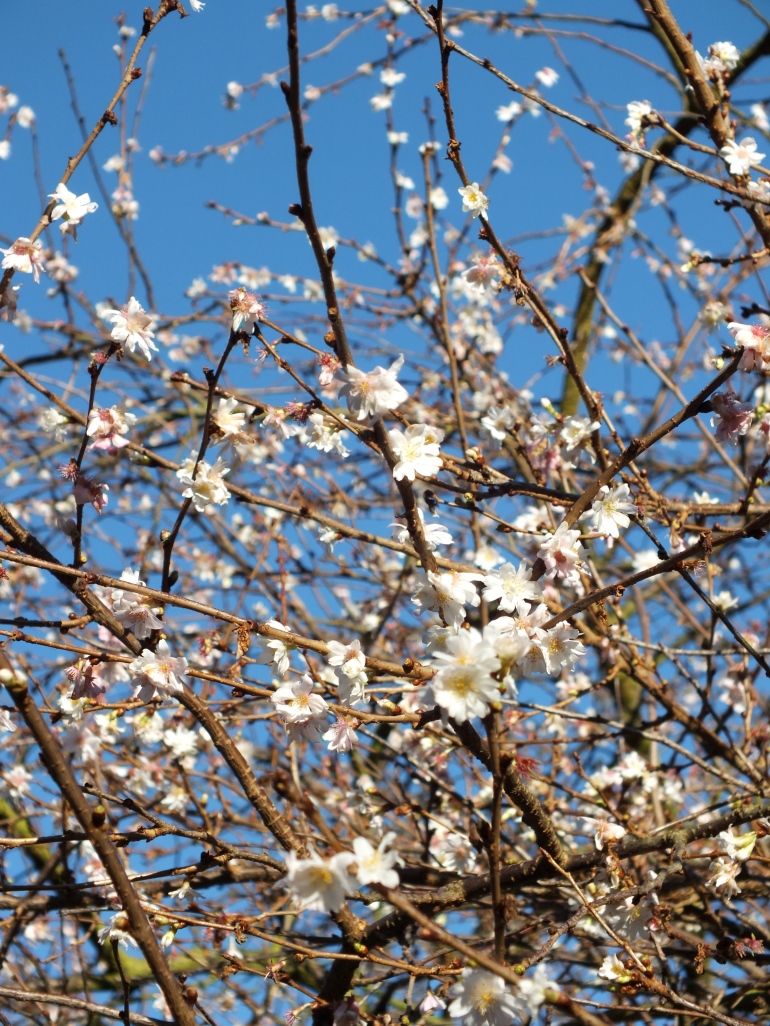 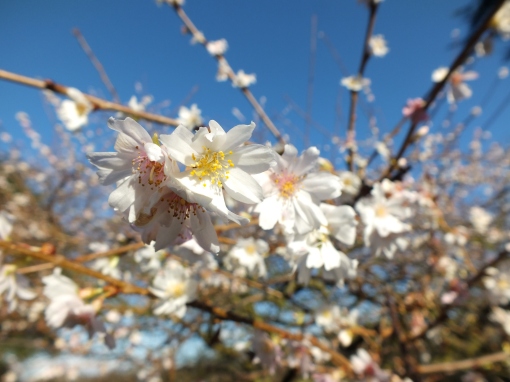 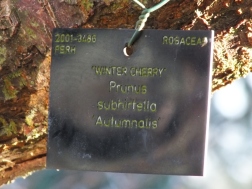 A favourite tree, in bloom intermittently throughout the winter months whenever a mild spell allows – the blossom and the mild weather are both always welcome. These pictures were taken last week, in the Japanese Landscape by the Chockushi-Mon. Bright blue sky and dazzling low winter sunshine adding to the delight of the pretty blossom.

The sainted Ursula Buchan, writing in The Telegraph in 2007 is kind enough to elaborate –

Sometimes the very best plants for the garden turn out to be right under our noses.

They are on show in every garden centre, yet somehow remain a little disregarded, not receiving the fanfare that they deserve. For me, one such is Prunus x subhirtella ‘Autumnalis’ which really should be in all but the smallest garden.

Why? Because it flowers off and on from November until March (something no other ornamental cherry does) and has bronze-green spring foliage and reliable orange and yellow autumn leaf colour.

What is more, this small tree is amenable, being tolerant of soil conditions and aspect, and it never creates much shade, as the branches are not dense. I’d recommend it for most gardens, whatever their situation.

More importantly, its flowers have a delicacy and charm completely unknown to the more showy spring-flowering cherries – the less-than-subtle ‘Kanzan’, for example, which you will come across in every park and along every suburban avenue.

A broad, spreading, deciduous tree, Prunus x subhirtella ‘Autumnalis’ is capable of reaching a height of 8m (26ft) at maturity, but usually attains rather less. The leaves are 7cm (2¾in) long, oval and sharply toothed. The flowers are pink in bud, semi-double, 1cm (½in) across, pendulous, held in small clusters and white when fully opened, although they acquire pink tones as they fade.

Unlike spring-flowering cherries, ‘Autumnalis’ flowers in flushes between November and March or even April, only being temporarily halted by cold weather. This tree is frequently to be found in lists of plants flowering in public gardens on New Year’s Day. The flowers are not profusely carried but, nevertheless, look good against a blue sky, and gladden the heart when there is so little else of colour in the garden.

The autumn leaf colour is also rather better than in many other ornamental cherries. And these trees are also extremely hardy. For example, they grow well along the burn at Kailzie Gardens, near Peebles in the Scottish Borders, which is 210m (700ft) above sea level and experiences comparatively harsh winters.

The similar, and possibly showier, Prunus x subhirtella ‘Autumnalis Rosea’ has red-budded, pale pink flowers which fade towards white with age. Both these trees can be grown either as specimens or as constituents of mixed borders, since they only cast a light shade. If grown in rough grass, the obvious accompaniments for the flowers in late winter and early spring are snowdrops, aconites, crocuses and early narcissi.

Since the trees merge into the background in the summer, they can be used as supports for clematis or not-too-vigorous climbing roses. In autumn, they associate very well with autumn flowerers, such as the pink and white varieties of Anemone x hybrida as well as border sedums and Cyclamen hederifolium.

These trees are usually sold as 1.2m (4ft) to 1.8m (6ft) tall standards, but it also possible to find them offered as bare-root trees (as for example from Ornamental Tree Nurseries), and these are cheaper and available now, as the trees are becoming dormant.

Matthew Tanton-Brown, nursery manager at The Place for Plants in Suffolk, is a big fan, although he warns that, like all Prunus, they are surface-rooters, which can be a disadvantage if you plant a tree in the lawn.

He recommends that a tree should be planted into a large square hole, rather than the more conventional round one. The reason for this is to encourage roots to spread outwards, once they hit the corners, rather than simply growing round and round, as if the tree were in a giant container. This tree likes a position in full sun in a reasonably fertile soil and, though hardy, it makes sense to plant it where it will be sheltered from cold winter winds. It should not need much pruning but any work should be done on a dry summer day.

‘Autumnalis’ is, as a rule, longer-lived than many of the Japanese ornamental cherries. Two closely related cherries flower in early spring – ‘Fukubana’ in Barbie pink and Prunus pendula ‘Pendula Rubra’ with brick-red flowers. But, at that time of year, they are likely to lose out to the larger-flowered Japanese cherries, except to connoisseurs of the elegant and understated.

An unlikely seeming colour in winter, pink flowers pop up on a surprising number of shrubs, their brightness welcome against the prevailing brown and grey.

Camellia sasanqua ‘Narumigata’ has pretty, single, extremely fragrant, flowers, white edged with pink, in November and December, on an upright shrub, which can be container-grown. It does best in a sheltered, warm spot.

Erica carnea ‘December Red’ is a lime-tolerant, winter-flowering heather, with pinkish-red flowers from December to early spring on a 15cm (6in) tall plant.

Viburnum x bodnantense ‘Dawn’ begins flowering in October and does not cease until February or March.

Viburnum farreri ‘Compactum’ is deliciously fragrant and, at less than 1m (3ft 3in) tall, suitable for small gardens. 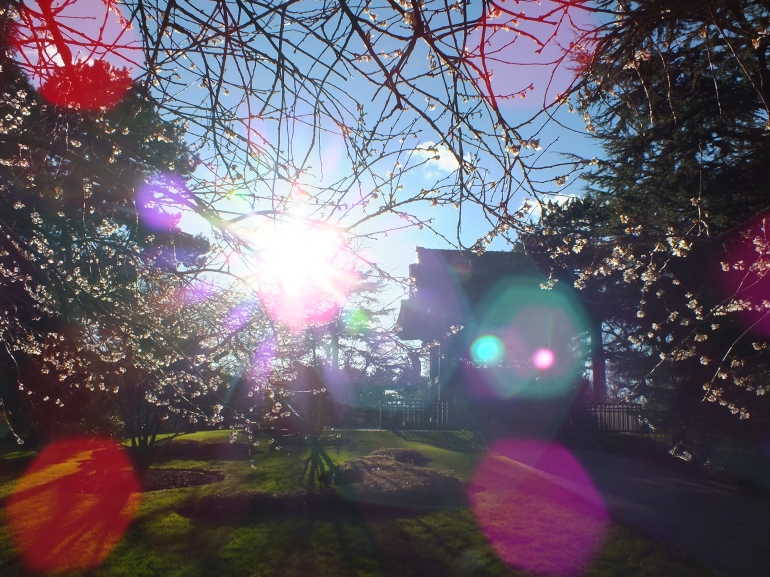