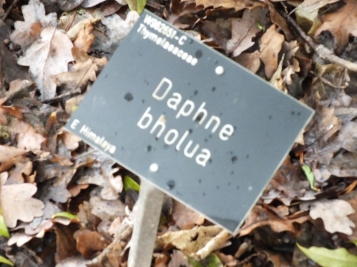 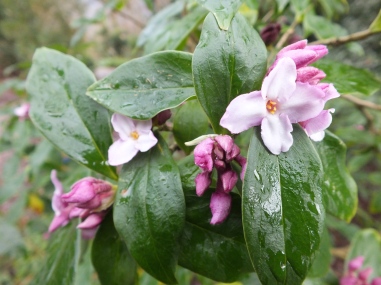 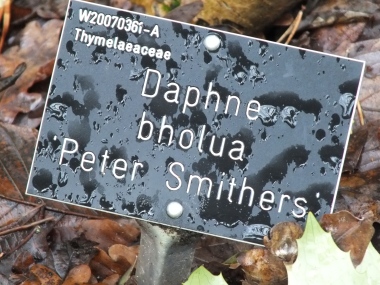 (above) Daphne bholua Peter Smithers (more reliably evergreen than some, for example the more commonly available Jacqueline Postil which can drop many of its leaves after flowering) 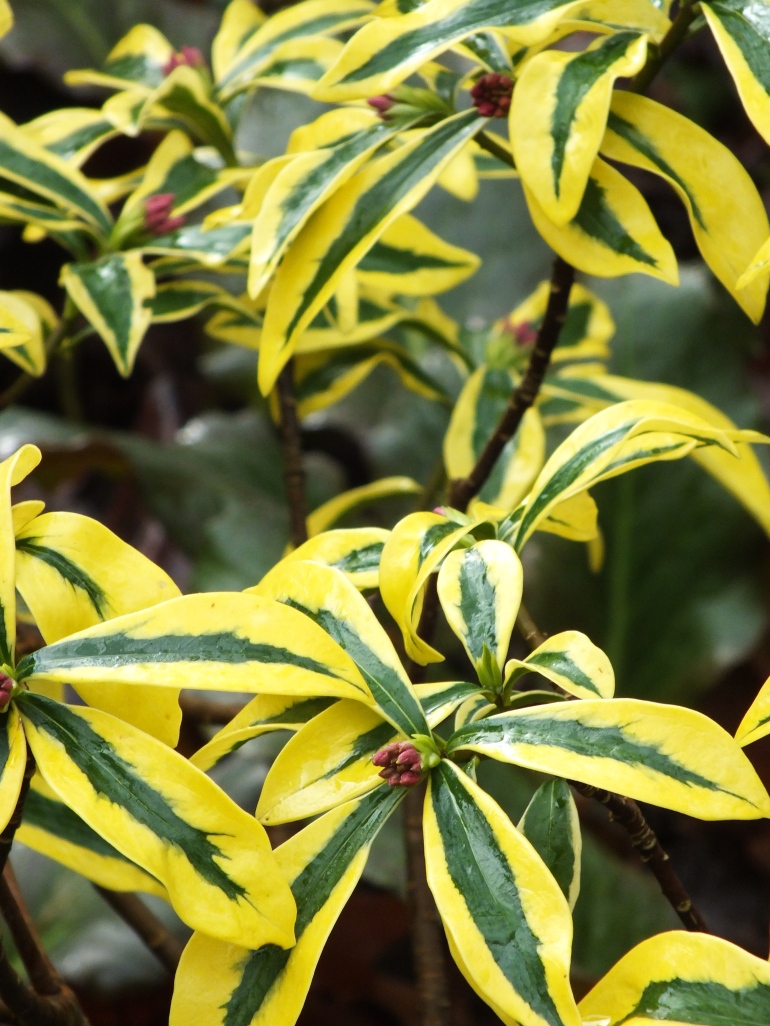 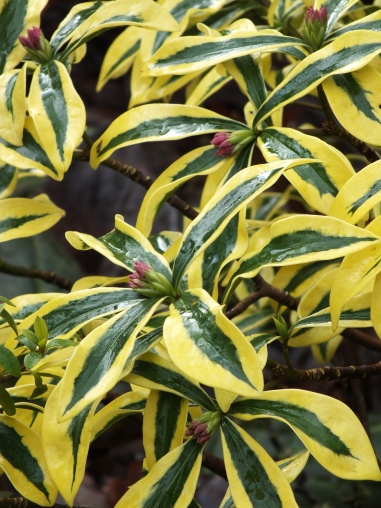 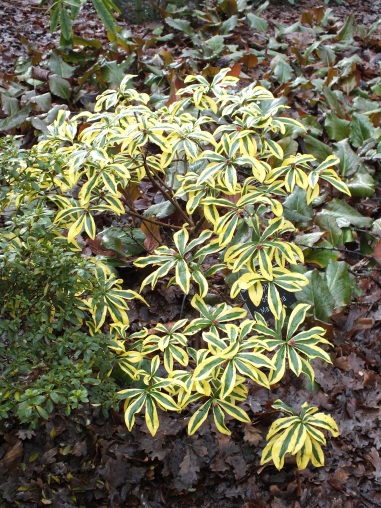 (above) Daphne odora Mae-Jima – with more gold than green 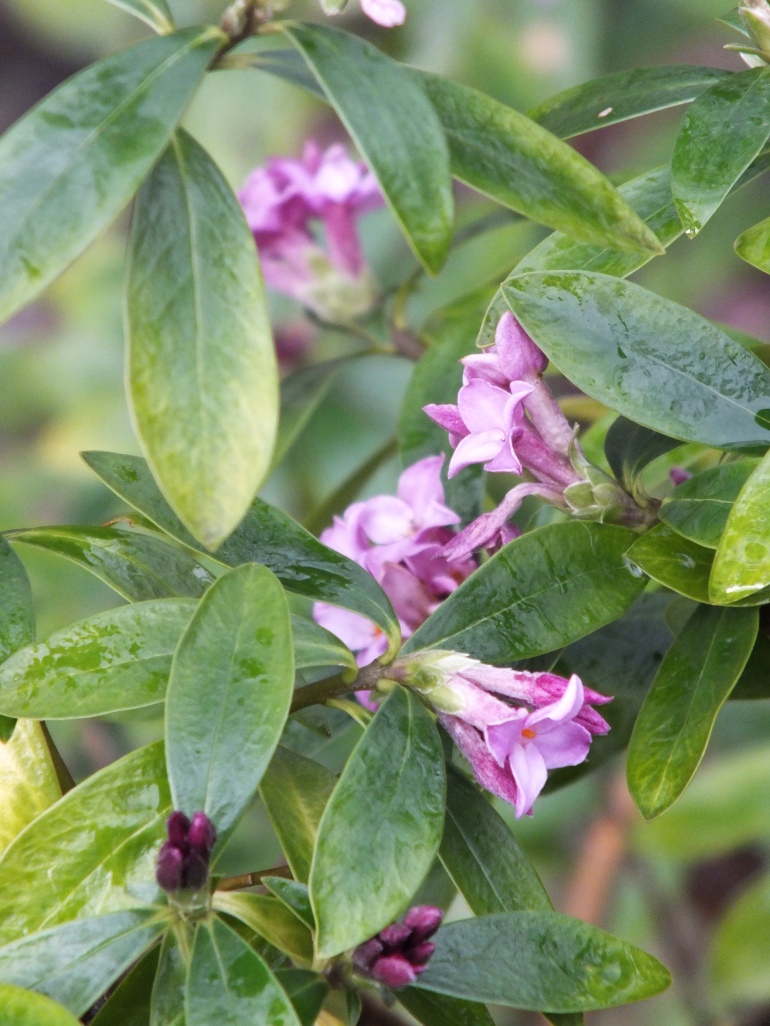 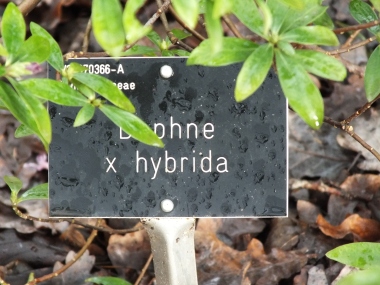 Battleston Hill, a woodland garden of winding paths was rich with the fragrance of these delightful shrubs – these pictured are evergreen, or mostly so, with waxy flowers pumping out a heady perfume, carried on the air for several metres from the plant, so that it is noticed before the source is located. There are many more species planted in these gardens, but time was short and I was limiting my wanderings just to parts of the hillside – more plant-hunting next time.

They are expensive plants to buy – propagating them has been likened to voodoo and they are slow growers to boot, so even small plants can command high prices. Once planted, they resent being moved and will sulk if they have to be relocated – and keep the secateurs away – there should be no reason for annual pruning given their slow rate of growth. The taller specimens can be damaged by mechanical causes such as a coat of heavy snow – a large stand had to be hard cut back at the Kew outpost, Wakehurst Place a couple of years ago after snow storms.

A sheltered spot is a must, away from cold winds and probably only a reliable prospect wholesale in the South, with additional care the further North you travel. Avoid waterlogged soil (moist, but well-drained comes to mind as perfect) and some summer moisture ensures continuing growth and flowering. For true summer flowering types, look out the diminutive Daphne x transatlantica Eternal Fragrance – I’ve mentioned this in at least one previous post.

There are other varieties to choose from – the most commonly available is probably Daphne odora Aureomarginata – with a slim gilded margin to the otherwise plainly green leaves. Daphne odora Mae-jima, pictured above, is more gold than green and forms a low, quite loose mound with rose-pink scented flowers. It was a stand-out plant in the leafy undergrowth at Wisley. There are deciduous forms, for example Daphne mezereum where the bright purple-red flowers hug the bare stems, but it is not to my taste!

I’ve turned to other Proper garden writers previously too, for their take on one plant or another. Graham Stuart Thomas cuts right to the delights and disappointments of the genus when he writes in his book ‘Ornamental Shrubs Climbers and Bamboos’ –

These are mostly small shrubs with deliciously scented flowers. They are, when successfully growing, the pride and joy of gardeners, but are often the cause of their despair. They may thrive for some years and then incontinently die, or gradually pine away, or they may refuse to grow at all. The greatest success for most of the larger species seems to be assured on retentive soils that are, even so, well-drained, and in full sunshine. They should be planted when quite young since they resent root-disturbance. The seeds are poisonous, though eaten by birds; when required for propagation should be sown as soon as ripe, having washed off the flesh, though they may take more than once season to germinate.

Daphne x hybrida – Presumed to be a cross between Daphne odora and Daphne collina. Known since 1928. It is much like Daphne odora in its leathery glabrous leaves and exquisitely scented flowers, purplish in bud but opening paler, produced in the cool of the year, not the summer. A neat small shrub of considerable excellence, reasonably hardy, and unaccountably rare.

Daphne odora. Leathery-leafed little bushes, sparse unless well-nourished, producing from rich purple buds crystalline white flowers over a long period, which give off one of the most ravishing scents of the whole year. The nodding heads of blooms, accompanied by a few leaves, are perfect for a winter buttonhole. It is generally considered that ‘Aureomarginata’- first figured in 1841 – is the most hardy, but my best plant, after a series of severe winters, is of the plain green type. It is important to give them a sheltered corner and to keep them well-nourished. They do not respond to pruning or cutting back when open or leggy, but pay for nipping out when young. Several forms of leaf variegation have been named.

Daphne bholua – A strong growing, erect shrub, when suited in humus-laen soil in our warmer counties, either in sun or part-shade. It is not a well-furnished shrub; the leaves are rather sparse and the summers’ growth apt to be long. The deliciously scented flowers are borne from midwinter onwards; they are white with purple outside to rich pinkish-lilac. Introductions from its highest latitudes have proved reasonably hardy. ‘Gurkha’ and ‘Sheopuri’, both from Nepal, have established themselves in sheltered gardens. ‘Jacqueline Postil’ is an evergreen seedling from ‘Gurkha’.

Another delightful, crafty day in the company of @caagallery www.caa.org.uk
A beautiful day #caagallery #Artefact
Me with Emmanuel Cooper #caagallery #artefact
My home for the day #CAA #caagallery #contemporaryappliedarts #designcentre #artefact
Elephants and roses...
Andy's Bench...
Rosa multiflora Platyphylla, or Seven Sisters, making her perfumed Mark at the Nurseries (before the rain).
Summer display starting off...
Tulips, earlier this year. Mostly Lasting Love.
Refusing to give in to Autumn ... #inshortstillthefirstfrosts
Enjoying some Dame Edna's at home, Lincolnshire grown